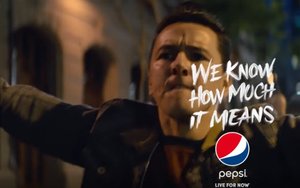 Now in its second year as a sponsor of the Union of European Football Associations (UEFA), Pepsi has launched its first global campaign based on a “Moments” creative platform.

The #PepsiMoment campaign, which features football/soccer stars Sergio Agüero, Alexis Sánchez and Vincent Kompany, looks to build on and associate the Pepsi brand with fans’ excitement in the lead-up to the UEFA Champions League Final on June 3 in Cardiff, Wales.

Taglined “Show How Much It Means," the campaign celebrates the sport’s fans by depicting their passion before, during and after matches, as well as how their enthusiasm elevates everyday moments, according to Brad Jakeman, president, Global Beverage Group, PepsiCo.

The brand has posted creative from lead agency AMV BBDO on YouTube, including a 60-second anthem video that’s a montage of game-related moments, called “We Know How Much It Means” (below); several 10-second videos excerpted from the anthem; and short videos featuring the three brand-rep athletes talking about their favorite football moments. (Kompany’s video can be viewed here, as a sample.)

The campaign will span “always-on, exclusive content” and sharable social media creative, including fan-generated content. It will live on Facebook, Instagram Stories and Snapchat, and be promoted in part through deals with football-covering media properties Copa90 and Bleacher Report.

There will also be a giveaway of tickets to the UEFA Champions League Final, in which fans will need to declare how far they’d go to win such tickets, says Pepsi.

Digital elements launched this week in the U.S. and most of the other nearly 75 countries targeted for the campaign, a brand rep reports. TV spots are also launching in most of those markets, although there are no current plans to use the anthem or related videos as TV spots in the U.S.

PepsiCo said that the campaign will put particular emphasis on marketing the brand’s zero-calorie options, and cans of Pepsi Zero Sugar (formerly Pepsi Max, and now known as Pepsi Black outside of the U.S.) and Diet Pepsi are integrated into the anthem video.

The brand is also rolling out special football-themed blue, black and silver packaging designs and in-store promotional materials that incorporate the slogan “Show How Much It Means” and images of players.

PepsiCo announced that its three-year sponsorship partner deal with the UEFA Champions League, which started in July 2015, would include flagship global brands Lay’s and Gatorade, as well as Pepsi Black/Pepsi Zero Sugar, and also integrate the Doritos, Lipton and 7Up brands.