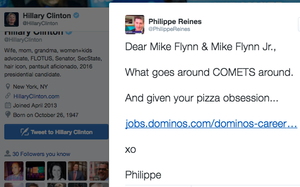 Given the number of brand plugs -- good and bad -- during Donald Trump’s campaign and presidency, to date, we’re introducing “The Trump Bump,” highlighting consumer brands that become news because of some association to the Trump White House.

Today’s bump features Dominos pizza, which was the punchline of a tweet from political consultant and former Hillary Clinton aide Philippe Reines that was retweeted by Clinton.

The tweet, which pokes fun at the resignation of Trump National Security Advisor Mike Flynn, and his son Mike Flynn Jr., alludes to a fake news report propagated by junior when he was working on Trump’s campaign. The fake news report alleged Clinton was connected to a bogus pedophile ring operating out of pizzeria named Comet Ping Pong, prompting a gunman to show up at the restaurant.

“What goes around COMETS around. And given your pizza obsession…,” Reines tweeted, adding a link to Dominos' employment application page.

“Philippe’s got his own way of saying things,” Clinton retweeted, adding, “but he has a point about the real consequences of fake news…”
Next story loading