Kohl's, Macy's Struggle: Can Department Stores Ever Be Cool Again? 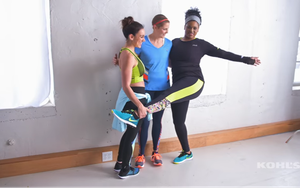 Department stores have been frantically trying to reinvent themselves to win with younger shoppers, relying on everything from digital investments to edgier designers. But it’s not working — and the latest financial results from Kohl’s and Macy’s make it clear just how vast the gap is between what young shoppers want and what department stores have to offer.

At Kohl’s, sales fell 2.7% in the fourth quarter to $6.21 billion, while same-store sales dropped 2.4%. Net income declined 15% to $252 million. Executives at the Menomonee Falls, Wisconsin-based retailer blame the results on a drop in traffic at its stores, which was slightly offset by an uptick in its e-commerce results.

And it says it hopes its increased emphasis on fitness and active wear, especially its planned introduction of a new Under Armour collection in March, will add to its appeal.

Observers say the poor results—the fourth quarter of disappointments — are indicative of a much larger problem. “The blunt truth is that Kohl’s does not have the pulling power that it once did and needs to work much harder to provide points of differentiation that really resonate with customers,” writes Håkon Helgesen, an analyst at GlobalData Retail, in his commentary on Kohl’s financial performance. And while he applauds its fitness effort (shown here), “we also get the sense that Kohl’s is something of a follower rather than a leader. It means selling products like Apple Watch, which are ubiquitous and readily available elsewhere.”

Plus, he is also concerned that the chain is failing to address two core problems: Attracting new people, and bolstering visits from infrequent shoppers.

At Macy’s, sales slid 4% $8.52 billion, while same-store results slipped 2.7%. Operating income fell to $815 million, compared with $936 million in the same period a year ago. As a result of the weak performance, Standard & Poor’s cut its rating of the fabled department store.

“The downgrade reflects our view of the company's weakened operating performance and competitive standing given the ongoing industry challenges, such as sustained low customer traffic, increased price transparency, and unrelenting competition from online, fast-fashion, and off-price retailers,” it says in its report.

Macy’s says many of its attempts to win over younger shoppers are beginning to pay off. “While 2016 was not the year we expected, we made significant progress on key initiatives that are starting to bear fruit,” says outgoing CEO Terry Lundgren, in its announcement. “These include continued improvement in our digital platforms, the rollout of our new approach to fine jewelry and women’s shoes, an increase in exclusive merchandise and the refinement of our clearance and off-price strategy.”

In recent months, Macy’s has announced a significant number of store closures and was the target of takeover rumors, including rival Hudson’s Bay, the Canadian parent of Saks Fifth Avenue and Lord & Taylor.

1 comment about "Kohl's, Macy's Struggle: Can Department Stores Ever Be Cool Again?".
Check to receive email when comments are posted.
Next story loading