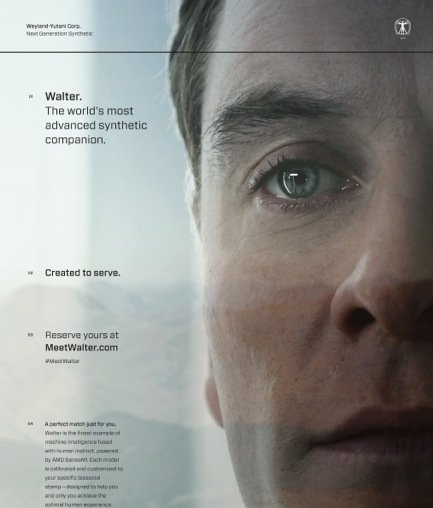 The film doesn’t hit screens until May 19th, but you can see the future now -- literally -- via the #MeetWalter campaign (embedded below). Utilizing a similar strategy that it used to promote the last film in the franchise “Prometheus,” the studio is using video content focusing on the synthetic android played by Michael Fassbender in both films.

In the #MeetWalter campaign, fans can to see the process of Walter coming to “life” and becoming sentient.

“We see the assembly of Walter -- the interior making of an android in the Alien universe for the first time -- which is kind of a big deal,” says Chris Eyerman, creative director at 3AM, the film marketing agency that it in conjunction with AMD, a bleeding edge technology developer that consulted on what the process might look like in “Covenant’s” 2107 future, getting into granular detail of things like the CPU that would power Walter.

“There’s a chip that gets inserted into Walter that brings him to life and they consulted on how it would look,” Eyerman explains.

AMD, which is the official “CPU/GPU chip partner” of “Alien: Covenant,” utilized its RYZEN and RADEON technology in the post-production of the film itself.

The short was conceived by “Alien: Covenant” director Ridley Scott, directed by his son Luke, and produced by RSA Films.