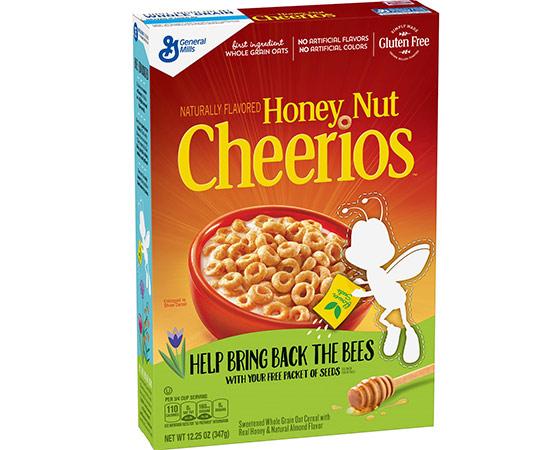 This spring, Honey Nut Cheerios has temporarily changed its box — replacing its normal BuzzBee image with just an outline of the mascot’s image.

The move and the PR and social media efforts surrounding it are aimed at getting consumers engaged in helping to address the dwindling number of bees and other pollinators that are crucial to the world’s food supply. More than two-thirds of the crops used to feed people, accounting for 90% of the world's nutrition, are pollinated by bees, according to Green Peace data cited by General Mills.

Honey Nut Cheerios’ #BringBackTheBees promotion is encouraging consumers to help plant more than 100 million wildflowers this year to provide friendly habitats for pollinators, which have been devastated as their grass and prairie land habitats have been converted to crop lands at an unprecedented rate. Some pollinators (though not honeybees) are in danger of extinction.

Through a partnership with Vesey’s seeds, consumers who register on a Bring Back the Bees area of the Cheerios site will receive free wildflower seeds to plant.

The site provides more information about pollinators and their plight, a guide to planting wildflowers, and a U.S. map showing where participants in the promotion will be planting the flowers. Cheerios’ Facebook page is currently featuring the Honey Nut campaign.

General Mills — which reports that about 30% of all ingredients in its products rely on pollination — says it has invested more than $4 million with the Xerces Society, the world's largest pollinator conservation group, to underwrite large-scale habitat projects at farms supplying the ingredients for its products.

Last spring, Honey Nut Cheerios announced that by the end of 2020, farms that grow oats for Cheerios will house approximately 3,300 total acres of dedicated pollinator habitat on 60,000 acres of land.