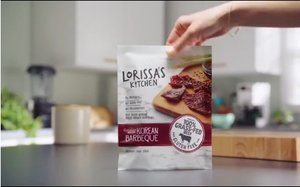 Lorissa’s Kitchen, a new company that makes jerky for “health-conscious” consumers, is out with a new national television and digital campaign.

Four spots, from Carmichael Lynch, will air on Food Network, HGTV, Bravo, and Travel Channel, as well as on RealSimple.com.

“Snackfesto” (below), shows the time-consuming lengths that some people go through to prepare healthy snacks — chopping, measuring, counting nuts and carrying around plastic containers — contrasted with the simplicity of just opening a package of Lorissa’s. The other ads include "Energy Balls," "23 Almonds" and "Nut Butter."

Lorissa’s has also released a two-minute online video featuring the founder of Lorissa’s Kitchen talking about how she married into a family with a jerky-making tradition and decided to create a business out of preservative-free, responsibly sourced jerky products.

In addition, the brand will engage in outreach via influencers, and participate in events around the country. This year, the focus will be on active lifestyle and food events in Denver and Portland, Ore., including Bolder Boulder and Denver’s Bike to Work Day. Lorissa’s also has a partnership with Lifetime Fitness that includes Esprit de She events throughout the year.

“We’re experiencing this cultural tension with regard to the amount of time and energy involved in clean eating,” says Pratt. “Just look at how much #mealprep is discussed on social media. We’ve got a solution — a prep-free snack to complement this lifestyle — and we want to shout it from the rooftops.”

Rather than focusing on age or gender demographics per se, the brand is looking at psychographic and attitudinal information to target “a core consumer who has a very discerning approach to eating, but doesn’t want clean living to come at the expense of just living,” she says.