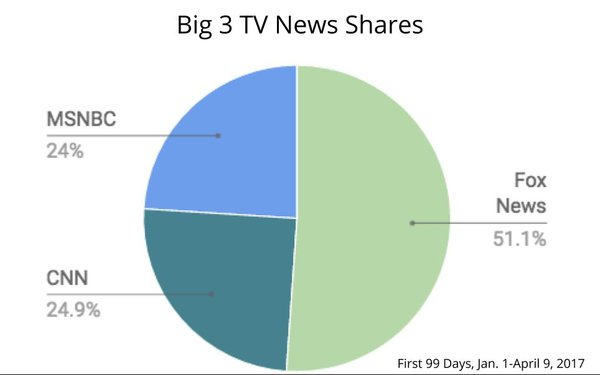 In terms of raw numbers, the first 100 days are shaping up to be the TV news story of all time, according to an analysis of the first 99 days of the news year.

Analyzing the first 15-weeks of the year, Wall Street analyst Brian Wieser finds what appears to be a record volume of viewing of TV news.

In a note sent to investors early this morning, Wieser said that represents a 21% annual growth vs. a decline of 1% for overall television viewing.

Wieser did not comment on what was driving the record consumption, though it coincides with the start of the Trump Presidency.

He did note, however, that news is playing an increasingly important role inside big media companies with news divisions.

Fox news accounts for more than a quarter of 21st Century Fox’s profits, and CNN “likely accounts” for more than 10% of Time Warner’s, Wieser writes, adding, “each of the news operations at CBS, Disney’s ABC and Comcast’s NBCU benefit their parent companies in meaningful ways,” citing not just profits, but “the political influence that follows from these divisions.”
Next story loading