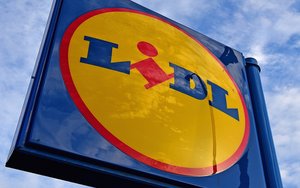 While Amazon’s purchase of Whole Foods Market last week stole all the headlines, the food retailing world was already bracing for a different upheaval: Lidl, the German retailer known for both high-quality food and rock-bottom prices, opened its first U.S. stores. And with ambitious — and accelerated — plans to open hundreds more, the invasion has every sector of the food world nibbling at its fingernails.

With ads promising prices so low they make shoppers swear, Lidl (rhymes with needle) unwrapped its first stores last week in Virginia, North Carolina and South Carolina. After lining up in parking lots and being invited to “rethink grocery,” people are filling their carts with bargain organic produce, sustainable fish, private-label wine and even fashion (it’s currently hyping a line made in partnership with fashionista Heidi Klum).

“Surprise is a huge part of the offer,” writes Mike Paglia, director of retail insights for Kantar, after exploring some of the just-opened stores. “Roughly 20% of the center store is devoted to ‘Lidl Surprises,’ an array of unexpected nonfood items, such as diaper bags and dress shoes. These items are available in limited quantities and rotated weekly with the aim of driving a treasure hunt mentality. Once they’re gone, they’re gone.”

Described by some as the kind of store people might expect if Trader Joe’s and Walmart had a baby, the chain is well-loved around the world, with more than 10,000 stores in 27 countries. It opened its U.S. office in 2015, and while it initially planned to open stores next year, it soon fast-tracked efforts and will open 20 stores this summer in the mid-Atlantic. It has announced plans for 100 new stores in the next 12 months, and Reuters reports that it’s aiming for 330 locations by 2020.

Lidl’s moves have had both Aldi and Walmart aggressively defending their own everyday-low-price positioning. But it differs from Aldi, another German-owned competitor that continues to gain U.S market share with its low-priced, limited-assortment offerings, by coming across as a purveyor of carefully curated items as opposed to a budget-shopping experience. And it differs from Walmart with its smaller size and low-stress layout. Lidl offers “less complexity, lower prices, better choices, and greater confidence," says Brendan Proctor, president and CEO of Lidl US, in its announcement.

Compared to conventional stores, Lidl is much smaller, at about 20,000 square feet and just six aisles. Offerings include fresh baked goods throughout the day, sustainable choices (including certified fresh and frozen seafood) and private-label products that are free from fake colors, trans fats and MSG, as well as many organic and gluten-free options. Its cheeses and wines are already winning prizes in the United States. And, not unlike Costco, it sprinkles in weekly non-food specials in everything from fitness equipment to fashion. Because some 90% of its products are private label, it’s able to offer all that at up to 50% lower than other supermarkets.

And if Lidl can do as well in the U.S. as it has in the U.K., they’re smart to worry: In five years, its market share has reportedly climbed from 5% to 12%, while Asda, Morrisons, Sainsbury's and Tesco have lost ground.

Paglia agrees. “Supermarkets are in the crosshairs,” he writes. “The fresh bakery. The perishables. The store size. Most importantly, the mid-market shopper. Make no mistake: Lidl is competing with conventional big-box supermarkets — and Walmart, for that matter. The dollar stores and the upscale retailers may get a glancing blow, but the grocers that lack sufficient differentiation are likely to have a difficult time staying competitive.”