McMansion Hell Resolves Battle With Zillow, Won't Use Its Photos In Future 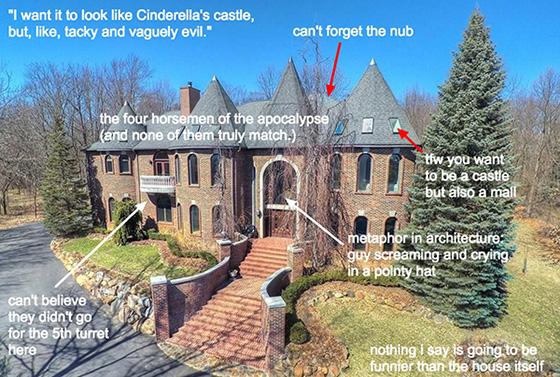 The blog McMansion Hell, which skewers oversize houses, returned to the Web on Thursday -- three days after its creator, grad student Kate Wagner, took down the site in response to a legal threat from real estate site Zillow.

But Wagner will not use photos from Zillow to accompany new posts on the blog, according to the digital rights group Electronic Frontier Foundation, which is representing her.

For its part, Zillow says it has no plans to follow through on its threat to sue Wagner. "It was never our intent for McMansion Hell to shut down, or for this to appear as an attack on Kate’s freedom of expression," the company stated. "We acted out of an abundance of caution to protect our partners -- the agents and brokers who entrust us to display photos of their clients’ homes."

Wagner's blog criticizes the design of McMansions, focusing on features like their lack of symmetry and poor proportions. Some of the photos on the site came from real estate size Zillow, which apparently licensed them from another company.

On Monday, Zillow alleged in a cease-and-desist letter that Wagner was infringing copyright and also violating the site's terms of use -- and potentially violating a federal anti-hacking law -- by posting the photos. The company argued that its terms "specifically prohibit reproducing, modifying, distributing, or otherwise creating derivative works" from the materials on the site.

Wagner used Twitter to call attention to Zillow's demands, and also to put out a call for help. The digital rights group Electronic Frontier Foundation took up her case and, on Thursday, fired back at Zillow. The EFF argued that Zillow can't enforce its terms of service against Wagner. The digital rights group also says Wagner's use of the photos doesn't infringe copyright, arguing that she made "fair use" of them.

But the EFF also wrote that "in the interest of compromise," Wagner won't use Zillow's photos in the future.