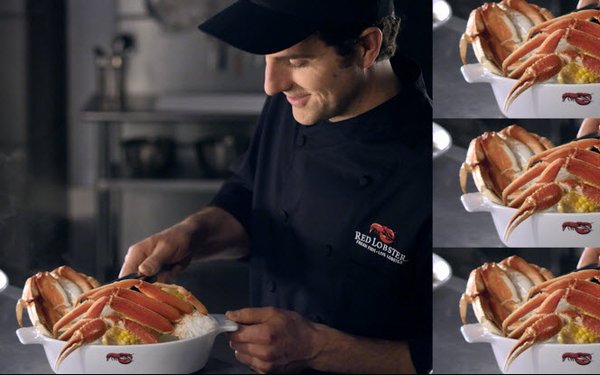 A Red Lobster campaign launching today marks the start of a new creative approach and tagline, “Now This Is Seafood.”

The first new ads are promoting Crabfest, one of the casual dining brand’s roster of annual, limited-time events.

Two TV spots (a 30-second, below, and a 15-second), which will run on national cable and network, feature close-up footage of the seafood, sides and sauces being prepared, and diners enjoying the fare.

What’s new is the multi-frame, fast-paced nature of the visuals, along with a sound track that “orchestrates” percussion instruments and the sounds of the kitchen and restaurant (boiling water, cracking crab, squeezing lemon and dipping butter), points out Mark Gilley, Red Lobster SVP, marketing.

Reverse-type messaging highlights the three types of crab offered (southern king, snow and Dungeness), and a traditional voiceover comes in only in the last few seconds, to state: “More kinds of crab than ever, new dishes, and all your favorites — only while Crabfest lasts. Red Lobster. Now This Is Seafood.”

This is the second Red Lobster campaign from Publicis New York (previously Publicis Kaplan Thaler), which became the brand’s agency of record in 2014 after Darden sold the seafood chain to private equity firm Golden Gate Capital Partners for $2.1 billion.

“Fresh,” the first campaign under the new owners, which launched in 2015, used shots of finished dishes, but against distinctive black backgrounds. It also introduced a new voiceover.

That campaign “worked really well” at its goal of “capturing ‘craveability’ and the pure joy of eating,” Gilley tells Marketing Daily. “But other food brands have started to use a similar style, so it’s time for us to evolve. The new campaign seeks to showcase the satisfaction of the crave, not just the creation of it.”

The campaign aims to “appeal to our existing guests and give them another reason to visit, while also inspiring those that haven’t visited in a while to come back,” he says.

Like most restaurant brands, Red Lobster focuses on event-related ads rather than pure branding campaigns. The new audio/visual approach will be applied for “other key events and business initiatives throughout the year,” according to Gilley.

Before selling Red Lobster, Darden had indicated that it would be decreasing the brand’s marketing budget overall and TV investment in particular, as digital marketing was ramped up.

Gilley declines to specify the brand’s actual marketing budget and media mix trends under Golden Gate Capital. However, he confirms that TV ads “remain the most recalled media for casual dining brands, so [they are] an important component of our media spend.” At the same time, “overall recall scores for TV advertising are on the decline as competition for consumers’ attention across channels increases,” he adds. “That’s why we use a cross-channel approach optimized to deliver the right message in the right format.”

All of the new creative is optimized for cross-channel use, he reports.

The deal includes a 60-second on-air custom vignette, plus online video that “takes the viewer through the journey of the crab with experts including on-air talent and Red Lobster leaders,” says Gilley.

On Facebook, Canvas and Carousel videos will be used “to give guests a deeper understanding of what makes each species and preparation so unique,” Gilley says. On Snapchat, the brand will use custom filters to inspire Red Lobster customers to share their dining experience with followers.
Guests are also being encouraged to share their Crabfest experiences on Red Lobster’s Facebook, Twitter, and Instagram pages.
The agency team supporting the campaign includes Spark on media buying, MWWPR on public relations, and Epsilon on in-restaurant merchandising.

Red Lobster’s sales were in decline prior to the 2014 acquisition.

Since then, the chain — which remains the top seafood chain in the nation — has invested in improving the quality of its food and the variety of its offerings, and has been attracting hard-to-woo Millennials, among others.

As of May 2016, the company was reporting that it had seen positive comparable-unit sales for six straight quarters. However, in its 2017 “Top 500” report, restaurant industry research and consultancy firm Technomic estimated that Red Lobster’s sales were down slightly in 2016: -0.8%, to $2.38 million.

Technomic estimated that the seafood restaurant category as a whole also saw a 0.8% sales decline, reflecting declines for No. 2 and No. 3 players Bonefish Grill and Joe’s Crab Shack, as well.

Gilley declines to discuss sales specifics, but says that since 2014, Red Lobster has “experienced positive business momentum and achieved [its] best-ever levels of guest satisfaction.” The brand’s ranking rose 3% in the American Customer Satisfaction Index’s 2017 Restaurant Report, to reach a four-year company high, he notes.