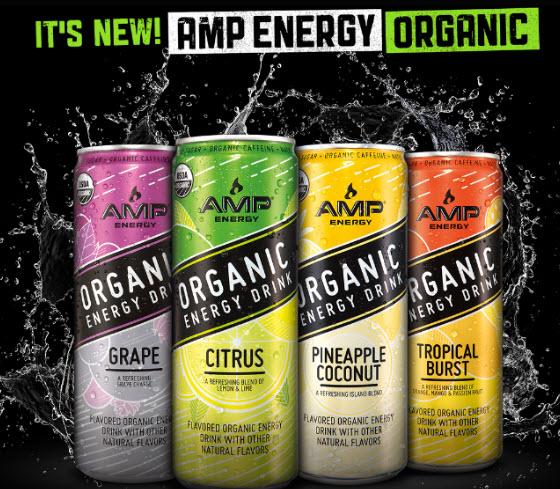 PepsiCo is taking its 16-year-old AMP Energy brand organic in hopes of reenergizing the line by leading the charge into a new growth segment within the beverage category.

PepsiCo is discontinuing all but the original citrus flavor of the regular AMP Energy drinks, and will roll out the organic varieties to retailers in all key channels across the U.S. in first quarter 2018, Justin Schwarz, PepsiCo’s marketing director, flavors and energy, tells Marketing Daily.

The launch campaign, themed “Organically Unstoppable,” is aimed at adults 18 to 34, according to Schwarz. It includes a limited-time (Sept. 5-10) offer for a free sample of AMP Energy Organic to users of 7-Eleven’s loyalty app; in-store promotions; and digital and social media, with emphasis on geo-targeted mobile and short, shareable video content.

The Motive agency handed the redesigns, POS and social media.

Despite a strong start, the original AMP Energy never overcame the dominance of Monster — which has since enhanced its lead with distribution advantages realized through a partnership with minority investor Coca-Cola — or of other category leaders, including Red Bull and Rockstar.

And with the energy drink category having become saturated in recent years by a flood of launches offering new ingredients and flavor twists, AMP Energy’s sales have suffered — despite its addition of new flavors and a successful 2016 launch of a zero-calorie variety ($25 million in first-year sales in convenience stores, per IRI data).

PepsiCo is far from alone in its interest in the energy drinks category, which has enjoyed robust sales growth for years, even as carbonated beverages have continued to decline. U.S. energy drink volume rose nearly 8% in 2015, following a 7.3% gain in 2014, while carbonated beverages’ volume declined by 1.5% and just under 1% in the same years, according to Beverage Marketing Corp.

Millennial males are the biggest consumers of energy drinks, but Millennial females (and exhausted Millennial parents of both sexes) are also increasing consumption — as are other groups, including women age 50 and up.

Overconsumption by teens, in particular, has become a source of controversy because of energy drinks’ high caffeine and sugar content. But despite medical concerns (both Monster and Red Bull have settled wrongful death suits), Millennials tend to view energy drinks as both novel and healthier-seeming alternatives to carbonated soft drinks, as Packaged Facts noted in a recent report.

It’s not surprising, then, that PepsiCo’s own research confirmed third-party research showing that consumers are showing strong interest in “natural” energy drinks. Mintel, for instance, reported last year that 26% of U.S. consumers said that they would be more comfortable drinking energy drinks or shots made with all-natural ingredients, and half or more of consumers in some other countries expressed a desire for more natural energy drinks.

“People want energy drinks to help them get through everyday life, not to jump off a cliff,” says Schwarz.

Organic varieties are relatively new, but growing. Seven percent of energy drinks launched globally in 2015 carried an organic claim — although 58% of those were launched in Europe, versus just 39% in North America, according to Mintel.

AMP Energy Organic's competition will include organic entries from Rockstar and Sambazon, as well as Hiball Energy, acquired last month by Anheuser-Busch (its organic energy drinks are made with guarana, ginseng, caffeine and B vitamins.

Schwarz says that the AMP organic brand is differentiated by its “five simple ingredients” (cane sugar, caffeine, natural flavors, carbonated water and citric acid), as well as by AMP's consumer recognition in the energy category.

AMP Energy Organic was developed to “better meet the needs and desires of an evolving energy consumer” who wants “an alternative to obtain the energy they need through the organic ingredients we know they want,” he sums up.