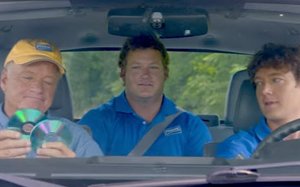 Perdue today unveiled its first television ads featuring Harvestland organic chicken — and members of the fourth generation of the family to be seen in the company’s advertising.

The two gently humorous 30-second ads (see one below), from The Via Agency, show Chris and Ryan Perdue exposing dad (and Perdue chairman) Jim to new tech including voice-activated car music, on-demand car services, automated floor vacuums, and the cloud. But they’re in turn impressed when dad shows off his vegetarian-fed, free-range, organic chickens.

The family advertising tradition began in the '70s, when Frank Perdue and, later, his father, company founder Arthur W., appeared in TV ads. In 1994, Frank’s son, Jim, began to appear in ads with his father.

Jim Perdue will continue to appear in Perdue’s ads, along with his sons, according to the company.

“We know that current and future consumers demand transparency,” he says. “Continuously improving animal care, and sharing that progress, is one of the ways we’re changing to maintain and expand consumer trust in the Perdue brand.”