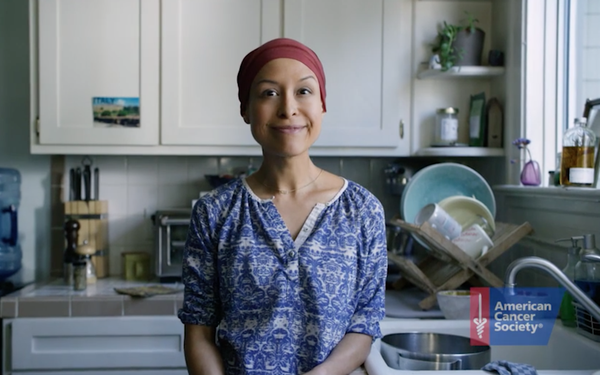 For much of its history, the American Cancer Society has been known for its cancer research and prevention efforts. But the organization does a lot more than that.

“We do so much, but there’s so much that people don’t know we do,” Irma Shrivastava, senior vice president of strategic marketing alliances, development and marketing, tells Marketing Daily. “What we realized was we weren’t doing ourselves the benefit of telling people what the ACS is.”

The ACS this week is launching a new marketing campaign highlighting these extended works, which includes driving cancer patients to treatments, offering insurance advice and arranging lodging near treatment for those who have to make long trips. The  broadened approach is in part a reflection of the ways cancer is being treated.

“Our mission is a world without cancer, but unfortunately, we’re far from that goal,” Shrivastava says. “There is increased survivorship, and we’re proud of our role in that.”

The campaign includes a new series of commercials (from The Richards Group in Dallas) featuring patient stories, told by actors who have been cancer patients themselves, explaining all that the ACS had done for them during their fight with cancer. “I used to have more hair. I used to have more color. And, I used to have cancer,” says a young man in one spot. He then explains that he “used to know” what the ACS did in terms of research, before availing himself of the other services. “I used to give a little, but then I got so much more,” he says. “I used to have cancer.” The campaign ends with a new tagline, “Attacking from every angle,” meant to express the breadth of the not-for-profit’s work.

“We take a personal story, and that draws in the heart, and through that we talk about the breadth of what the ACS does and is,” Shrivastava says.

The ACS’s previous campaign put the focus on the qualities cancer patients have shown fighting the disease. Telling stories such as a girl who had lost her hair due to chemotherapy getting ready for prom as a statement of “courage,” the campaign used the tagline, “Advantage Humans,” to showcase the everyday fight against the disease.

The purpose of the new campaign, which will include paid and donated media, radio partnerships and other activations, is to convince people that the ACS is a worthy investment for their donations in the fight against cancer.

“This speaks more to the point of difference for the ACS. We had [previously focused] on our connection to addressing cancer research, but the marketplace has changed,” Shrivastava says.