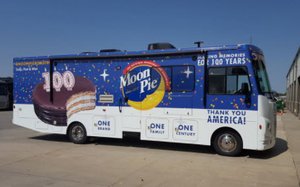 While brand tours are hardly unusual, you don’t often see folks from the C suite driving the trailer.

But you will for MoonPie’s 100th anniversary, “Thank You, America” tour.

The company’s top executives are acting as tour captains and actual drivers of the “MoonPie Memory Mobile” — a colorfully branded Winnebago Vista 31BE.

"You'll find us driving the speed limit in the right lane, I assure you," joked Tory Johnston, vice president of sales and marketing at Chattanooga Bakery, the fifth-generation, family-owned company that’s been making MoonPies since 1917. “We won't be hard to spot, and we'll have samples ready to share. Give us a honk.”

The four-month tour, which started on Sept. 17 at MoonPie headquarters in Chattanooga, Tenn., will make thank-you stops at customer offices, media outlets, festivals, sporting events, and other locations. It will visit North Carolina and Virginia before heading to other U.S. markets.

The company, which makes more than 1 million MoonPies a day, has national distribution, with particular concentration in the Southeast and Southwest.

But even classic confections don’t reach the age of 100 without savvy marketing and some adaptation to changing consumer demands.

These days, MoonPies are available in three sizes and five flavors. And during the tour, the company is sampling and promoting an “Original Recipe” MoonPie, which hit stores nationwide starting this month. This variety eschews high fructose corn syrup for cane sugar, and has no preservatives — a “next generation” MoonPie that actually “harkens back to how they were made decades ago,” says the company, which acknowledges that this aligns with consumer demand for “clean” ingredients.

Further, the company is supporting the tour with a cross-promotion deal with Winnebago. MoonPie and Winnebago will both be posting social media updates on the whereabouts of the MoonPie Mobile and sharing info on the tour via their respective websites.