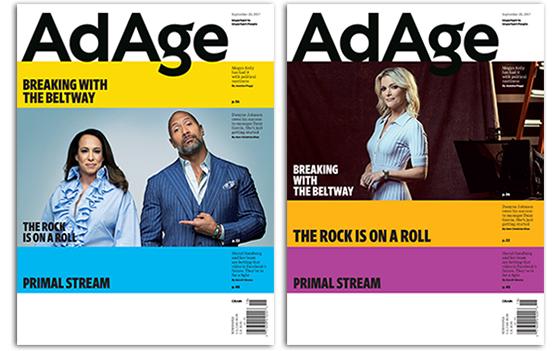 Marketing and media focused magazine Advertising Age has rebranded to Ad Age, and debuted a new logo, tagline and branding across platforms on Monday.

"Our name change is a symbol to our audience about our evolution. It not only reflects becoming current, but it also reflects a philosophical shift to go beyond advertising as the primary form of our content. We are a brand that covers the intersection of marketing and culture, and it's now reflected in our name,” publisher of Ad Age, Josh Golden, told Publishers Daily.

Brian Braiker, editor of Ad Age, noted in a post on the site that he also wants Ad Age to expand beyond a trade publication and enlarge its coverage beyond the industry.

"it's time to widen the aperture. Everything is a brand. Everything is an ad for itself. So our coverage needs to reflect the broader culture beyond the weeds of our industry. We'll still get into those weeds, but we'll also explore the flowers," he wrote.

Bright bands of color now stream across the website. Ad Age's new logo is inspired by the original from 1930, and the tagline has returned to its first from that year: “Important to important people.”

Despite the nods to the brand's earliest iteration, Ad Age’s content theme this week is fittingly “reinvention,” with a focus on individuals and brands that have pivoted, adapted, innovated or evolved to "drive change."

The magazine has three cover stories, featuring The Rock and his new ad agency, Sheryl Sandberg and her team at Facebook, and Megyn Kelly discussing her shift to hosting daytime shows instead of focusing on politics.

In his post, Braiker, who joined Ad Age this spring, called “the visual expression” of the former Ad Age “fusty. Let's play some buzzword bingo! It was time to pivot. This space was in need of disruption,” he wrote.

As part of the changes, Ad Age has integrated its key Creativity and Datacenter products; Creativity is now a vertical section in the Ad Age print edition, with expanded coverage on innovation, culture and technology.