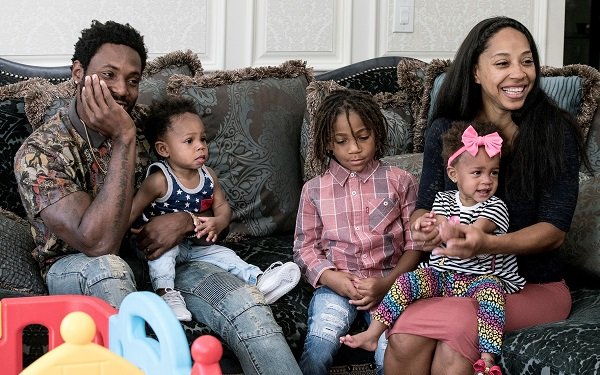 The incredible thing about this new reality show on USA Network about an NFL star’s family is that TV is still making shows like this.

The show is “The Cromarties,” featuring NFLer Antonio Cromartie (currently a non-active free agent), his wife Terricka and their five children. The show premieres Thursday night on USA Network.

A dizzying array of these celebrity family shows -- dozens and dozens of them -- have come and gone over the last 15 years.

Many of them were shockingly short-lived -- “Growing Up Twisted,” featuring the family of Twisted Sister rocker Dee Snider; “The Hasselhoffs” (David Hasselhoff and his daughters); and “Sinbad: It's Just Family,” featuring the one-named comedian -- to name just three of them.

A few of them lasted more than a few seasons or at the very least, they are not forgotten. “The Osbournes” and “Keeping Up with the Kardashians” come to mind.

Basic cable is still full of these shows. If you are like me, you see the titles all the time as you graze by various cable channels such as VH1, Bravo and others.

You might even wonder about them as you pass them by. “Love & Hip Hop”? What on earth is that? “Vanderpump Rules”? Who is this Vanderpump and why is this person's reality show always on?

There's even a show called “Larrymania” on NBC-owned Universo (a Spanish-language and bilingual network) about a Mexican singer-songwriter named Larry Hernandez (I just looked it up). It's one of those shows whose title appears so frequently that it too seems as if it is always on.

Every time I encounter this title, I immediately think of Larry Fine of the Three Stooges -- the only Larry I've ever felt even faintly maniacal about. Not to denigrate “Larrymania,” however -- the show is in its sixth season, which means it must be popular.

For its part, USA Network has one other family reality show currently -- “Chrisley Knows Best,” about the family of Todd Chrisley, an outspoken, wealthy South Carolinian.

On USA, the decidedly lighthearted “Chrisley” and now “The Cromarties” are vastly outnumbered by the network’s ever-expanding stable of “edgy” (translation: depressing) dramas such as “Mr. Robot,” “The Sinner” and the new “Damnation” to name a few.

Whether the dark skies of USA will brighten with the addition of “The Cromarties” is anybody’s guess. On the show, the Cromarties certainly give it their all.

In the series premiere which USA provided for preview, Antonio is seen at home with his wife as he participates in the care and management of their five young children.

Fun fact: Cromartie, who comes from a family of NFL players, has a total of 14 children, nine of whom do not seem to be a part of this show.

He and Terricka are expecting a sixth child, who is due any minute. In the show, the two discuss the possibility of “home-birthing” the child with the help of two midwives who pay a consultation visit to their New Jersey mansion to spell out how this home-birth will work.

This sparked an idea for a new reality show -- “Real Midwives of New Jersey.” If anyone takes up this idea, please do not forget to give me credit, and also money.

Also on the premiere episode of “The Cromarties,” Antonio is assigned the task of organizing a backyard birthday party for their young son named Jersey.

Among the challenges: Making sure that the party is not threatened by black bears, which are prevalent in the neighborhood. Antonio has a solution, however -- filling a spray bottle with his own urine and then “marking his territory” on the backyard's trees and shrubbery. Spoiler alert: No bears intruded on this party.

What does the future hold for “The Cromarties”? Who knows? If it can draw an audience, perhaps it will hang in there and become for many of us another ubiquitous title for us to wonder about as we graze past.