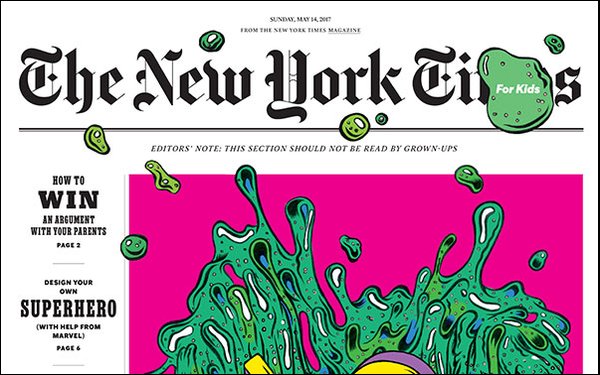 The New York Times is rolling out a monthly print-only section for kids, in response to positive feedback the Times received when it debuted its first Kids section in May.

The second edition of the Kids section will appear in the Sunday, November 19 edition of the newspaper. It becomes a regular monthly section next year, starting January 28.

According to the NYT, the first edition sparked an online petition to make the Kids section a regular feature in the paper.

“It absolutely makes us more likely to subscribe. One of the best parts of getting the newspaper on paper is that we can share it as a family,” Roy Bahat, one of the petition's creators, told Nieman Lab.

The Kids section will mimic regular sections in the NYT, including sports, national news, food, opinion and arts, as well as a mix of illustrations, photography and how-to’s for young readers.

“Our goal here is not only to help kids learn about the complex world they live in, but also to give them a taste, through a section designed just for them, of the pleasures of print media,” stated Jake Silverstein, editor-in-chief of The New York Times Magazine.

In the November 19 issue, readers will find a cover story about gene editing discovery CRISPR, a profile of a young DACA recipient, a story about the role of schools in natural disasters, a recipe for Thanksgiving leftovers and a new advice column featuring advice from an adult and a kid.

The second edition of the Kids section is sponsored by Google Home.

The NYT will also travel to a different public school around the country each month to get an intimate perspective on how kids think, and what they're thinking about, according to a report from Nieman Lab. For the November edition, Roper travelled to Charlottesville, Virginia.

The popular Times podcast “The Daily” will also air a special episode on November 19 for children to listen to with their parents. It coincides with the section launch.

The Kids section is part of "an ongoing initiative," per the company, to "reimagine the uses of the print newspaper." It is the third special print-only section produced by the publisher.

In August, the paper ran an excerpt of “The Underground Railroad” by Colson Whitehead, which went on to win the National Book Award. In December, it debuted a Puzzle Spectacular section devoted to different puzzles.

The NYT is also bringing back that Puzzle Spectacular section; it will run the second edition with the Sunday, December 17 edition of the newspaper.