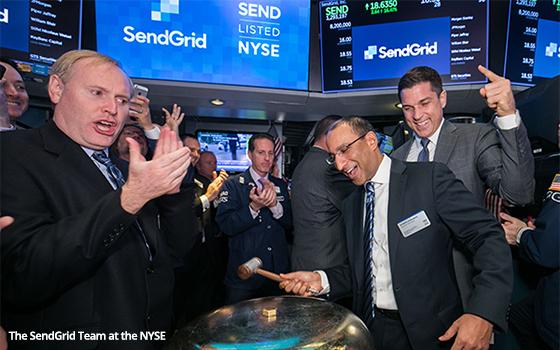 It’s a great day for the email business. SendGrid’s initial public offering took off like a rocket this morning, raising $131 million based on a $16 stock price.

And 60 “Gridders,” including founders Isaac Saldana, Jose Lopez and Tim Jenkins, were there for the ringing of the bell, according to CMO Scott Heimes.

Only two weeks ago, the Denver-based company said it planned to raise $112 million on a stock price ranging from $13.50 to $15.60. Revenue for the first nine months totaled $80.2 million, “which is higher than its entire 2016 sales,” according to reports.

SendGrid hopes to further evolve its email solutions and expand internationally, with a particular focus on Asia-Pacific and Latin America, Heimes says.

Observers hailed today’s performance. “We were not surprised to see the positive reception that SendGrid received on its IPO today — pricing above the range and trading 13%+ above its IPO price,” says Kathleen Smith, principal, Renaissance Capital, a manager of IPO ETFs. “The IPO was priced at a discount (compared to) to a group of fast-growth enterprise software peers and SendGrid had a stronger record of profitability and growth.”

“From here, investors will be looking at how well management meets expectations for growth and profitability," Smith adds, "in the next quarters ahead.” She continues: “The IPO market is seeing a strong pick-up in activity now as a result of reasonable valuations producing strong return for investors. The Renaissance IPO ETF (ticker IPO) tracks an index that is up 32% so far this year.”

Meanwhile, other email services companies are looking at this with great interest. Take SparkPost, which claims to be SendGrid’s primary competitor, although it has 180 employees compared to SendGrid’s 412.

Is SparkPost contemplating a similar move? Merrick declines to say, but he points to a recent Washington Business Journal article that quotes him as saying: “We are on track to IPO at some point in the future.” That article adds that, according to Merrick, “SparkPost’s revenue is “less than, but a significant percentage of that posted by SendGrid.”

Why did SendGrid choose to go public at this time?

“Our business is incredibly strong right now,” Heimes says. “We figured that email is an $11 billion market, but we have less than 3% penetration. There’s a tremendous opportunity to cement our marketing position around our digital communications platform.”

He adds that the IPO is only “a milestone in a long journey to build a true built-to-last company.”

The culture of the nine year-old company is built around the “4H’s,” Heimes continues. These are “Happy, Hungry, Humble and Honest.”

The Denver Post observes that SendGrid is “one of the rare Colorado tech companies to make it to the initial public offering stage in years.”

According to its October filing with the Securities and Exchange Commission, SendGrid provides three basic services: Email API, introduced in 2009; Marketing Campaigns, launched in 2015;  and Expert Services, fielded in 2016.

The majority of its revenue growth has been derived from the Email API service, which “allows developers to use our API in their preferred development framework to leverage our platform to add email functionality to their applications within minutes,” the filing states.

SendGrid applied to have its stock listed on the New York Stock Exchange as SEND. The lead managers for the offering are Morgan Stanley & Co. LLC and J.P. Morgan Securities.