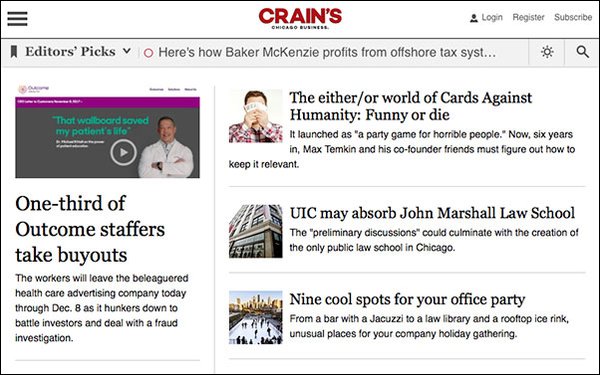 Crain’s Chicago Business is another publisher to end comments, joining other media companies in abandoning that feature.

While ChicagoBusiness.com was using discussion platform Disqus to host readers’ comments, Crain’s Chicago Business says “the trolls” were no match for the site’s team.

“Simply put, we do not have the personnel to manage this commentary, to keep it civil and fair and to halt the back and forth before it devolves into invective, name-calling and, in too many cases, outright hate speech. We'd rather not play host to these often anonymous commenters.

""They drive out more civil readers and potential commenters. They sully our content, our brand and our sponsors,” wrote the editors of Crain’s Chicago Businessin an Opinion piece on the site yesterday.

“So, to borrow a phrase, we're draining the swamp,” they added.

The post suggests readers communicate with one another and the publisher via social media and email.

Using these methods, readers will be “speaking to the world at large, rather than inside the echo chamber that our comments section generally has become." The editors also noted social media reveals more about a person’s identity in connection to their comments, allowing for less anonymity.

“Given the huge audiences Twitter, Facebook, LinkedIn and other social-media platforms continue to build, we hope you'll find them a useful alternative for airing their views,” they wrote.

In September,Al Jazeera English disabled the comments section on its site, saying it was “hijacked by users hiding behind pseudonyms spewing vitriol, bigotry, racism and sectarianism. The possibility of having any form of debate was virtually nonexistent.”

And in July, MSN temporarily removed comments on its sites to block “abusive and offensive posts,” according to iMediaEthics, joining sites like The Daily Beast, Mic, Reuters and the Chicago Sun-Times.

NPR, which got rid of the feature a year ago, found that Facebook comments for NPR posts were up year-over-year, reaching a high of 700,000 in January.

Publishers are increasingly directing readers to social media should they wish to comment on content, clearing up the site's pages and freeing up resources drained by combating trolls. If nonsensical comments appear below a shared article on social media, it does not next to a publisher's banner ads.