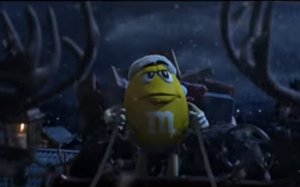 After more than two decades, Mars is releasing a sequel to the M&M’s “Faint” TV ad that’s become a holiday classic.

The original 15-second spot, which has been aired each holiday season since it debuted in 1996, shows both Santa Claus and M&M’s spokescandy character Red fainting after Red and Yellow have a surprise encounter with Santa as he’s leaving gifts under a Christmas tree.

The full-length, 90-second version of the new ad (below), “Faint 2: A Very Yellow Sequel,” has generated nearly 24,000 views on YouTube in under 24 hours, fed by PR and the brand’s promotion on Twitter.

The 60-second version’s first TV appearance is scheduled for this evening (Nov. 29) during NBC’s telecast of the annual Christmas tree lighting at Rockefeller Center.

The spot (which also has a 15-second version) will also air in 11 additional markets around the world through the holiday season, including Canada, Mexico, Europe, Russia and several Eastern European countries.

Created and produced by CLM BBDO in France with support from BBDO New York, the sequel shows Yellow trying to take over and save Christmas after Santa faints. Predictably, the well-meaning but hapless Yellow messes up, delivering the wrong presents to puzzled recipients (grandpa gets high heels, for example).

The heart-warming, “true meaning of Christmas” payoff comes as neighbors emerge from their homes on Christmas morning to give one another the correct gifts, with hugs and smiles all along.

Yellow: “Did I ruin Christmas, Red?” Red: “Actually, buddy, I think you made it even better.” Tagline: “Bring Everyone Together with M&Ms.”