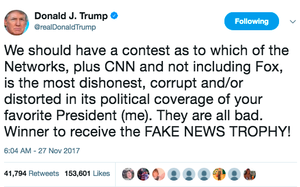 A week after President Donald Trump tweeted there should be a contest to determine which network is the “most dishonest, corrupt and/or distorted in its political coverage of your favorite President (me),” Fox has won the first-ever “Fake News Trophy,” according to a survey of American voters conducted by Rasmussen Reports.

While President Trump originally tweeted that Fox News should be excluded from the contest, 40% of the nationally projectable poll, conducted online and via phone, said Fox should win the Fake News Trophy.

Six percent said the award should go to “someone else,” while 11% were undecided.

“A closer look finds that while 53% of Democrats and a plurality (42%) of voters not affiliated with either major party declare Fox News the winner, just 24% of Republicans agree,” Rasmussen reported. It added: “40% of GOP voters opt instead for CNN, a view shared by just 13% of Democrats and 24% of unaffiliateds.”