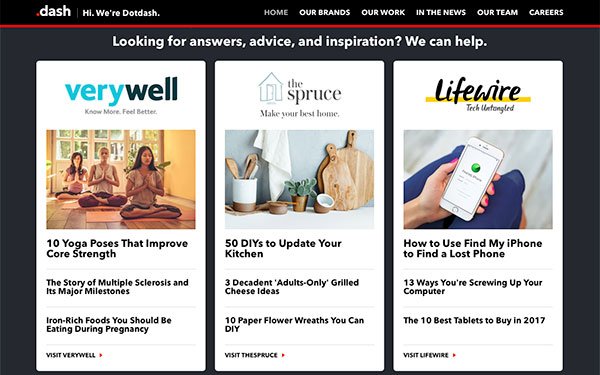 About.com had become a relic of the internet. Offering “how to” advice on nearly anything, the site, nearly 20 years old, operated as a one-stop-shop that relied on appearing atop search results rather than flashy content.

This approach nearly led to its demise. As the content and design became dated, advertisers became harder to come by.

That was before parent company IAC opted to start anew.

Renamed Dotdash in May of this year, the publisher branched out to focus on six unique sites, including Verywell, The Balance, Lifewire, ThoughtCo and travel site TripSavvy.

Adding to the new, updated design and content, DotDash decided to run 35% fewer ads on its sites versus About.com, a move that may sound absurd in today’s digital environment.

But the strategy is paying off.

DotDash has seen an increase in traffic, due to a higher placement in Google searches following the redesign. CEO Neil Vogel said in a story with Business Insider that the thinking is: Fewer, better ads will attract a larger audience, allowing the site to eventually charge more for advertising.

The publisher reported ad revenue is up 40%, amounting to more than $20 million in the fourth quarter. Additionally, according to comScore, the publisher reported 67 million visitors in October. It has added 18 million new users since March, which comes to a 37% increase in traffic for the site.

Next up, the publisher plans to explore more commerce options going forward and engage with its growing audience, a move that has proven profitable for many digital outlets.