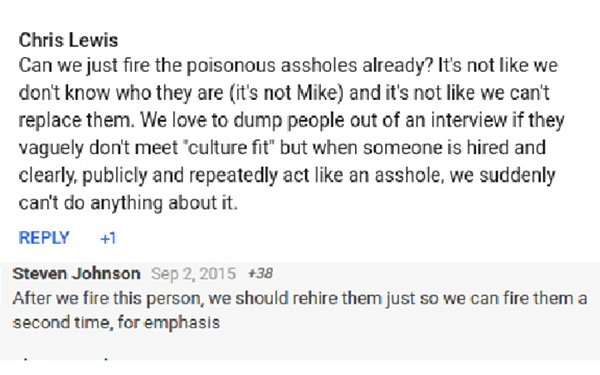 The document calls attention to the two men's perceived conservative political views, male gender and Caucasian race. "Google employees who expressed views deviating from the majority view at Google on political subjects raised in the workplace and relevant to Google's employment policies and its business, such as 'diversity' hiring policies, 'bias sensitivity,' or 'social justice,' were/are singled out, mistreated, and systematically punished and terminated from Google, in violation of their legal rights," according to the court document.

Google fired Damore in August 2017 after the engineer shared his views in a memo and it went viral. The company said Damore perpetuated gender stereotypes.

Damore and Gudeman are demanding a jury trial and have supplied a long list of screen shots based on internal written discussions and documentation to support their claim.

Many are written with unguarded candor, perhaps never thinking their words would go farther than Googlers' email inboxes. "The choice to be a Republican is the choice to align yourself with a white supremacist, xenophobic regime," wrote one Google employee. "That wasn't true in 2015, but it's true now."

Google’s overall workforce is 69% male, 31% female, and 56% are Caucasian, according to the company’s most recent diversity report. Some 35% are Asian, 4% Hispanic, 2% Black, less than 1% Native American, and less than 1% Pacific Islander. Some 4% are two or more.