'Welcome Back To The Studio' 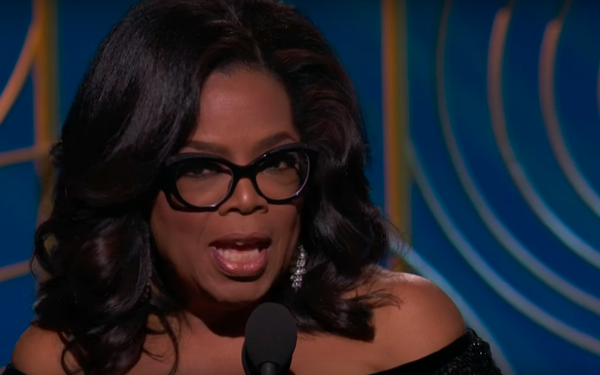 If there was any doubt that the Trump White House operates like a scripted reality TV show, it was put to rest when Donald Trump opened today’s live televised cabinet meeting with that statement, literally calling the Cabinet Room a studio.

Whether he was joking, jerking our chains or wagging a dog was not clear. What was clear, is that the American Presidency is becoming a Hollywood production.

Just consider the response to Oprah Winfrey’s speech at the Golden Globes Awards telecast Sunday night. The media -- real, “fake,” and social -- went bonkers on speculations that Oprah was poised to make a bid for the White House in 2020.

While Winfrey walked that speculation back -- a normal tactic for a speculative candidate at this stage of the game -- pundits and analysts debated her chances.

Data from the Q Score Company, which rates the familiarity and likability of celebrities for casting and endorsements, predicted Oprah would beat Trump.

A poll released this morning by Rasmussen Reports, a right-leaning pollster routinely touted by Trump himself, finds Winfrey would beat Trump by a comfortable 10 percentage point margin in 2020.

“Forty-eight percent of ‘likely’ U.S. Voters would opt for Winfrey, while 38% would choose Trump,” Rasmussen reported, adding, “But a sizable 14% are undecided.

“Winfrey has the support of 76% of Democrats, 22% of Republicans and 44% of voters not affiliated with either major political party. The president earns 66% of the vote from Republicans, 12% of Democrats and 38% of unaffiliateds.”

Whether or not Winfrey would actually win, I fear the big loser would be the seriousness and legitimacy of the Presidency. Trump has already done his best on that front (note his “studio” quip opening today’s blog). And Winfrey, as well-intentioned, smart, and capable a leader as she may be, is just another in a long line of celebrity apprentices on deck. Names like Dwayne “The Rock” Johnson and even reality TV star Mark Cuban are regularly mentioned.

While they all have huge name recognition and popularity, it’s time to Make The Presidency Great Again.