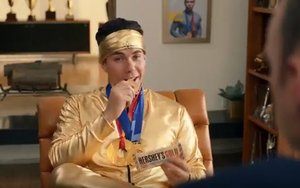 Eight-time Olympic speed skating medalist Apolo Ohno is starring in two spots for the Hershey’s Gold launch. Gold is just the fourth new candy bar under the Hershey name in the company’s history, and the first since the launch of Cookies ’n’ Cream 22 years ago.

Gold — a chocolate-less, textured confection that combines sweet (buttery cream) and salty (crunchy bits of pretzel and peanuts) — is now in stores, and ready for a major marketing push commencing around the Winter Olympics in Pyeongchang, South Korea that start on Feb. 9.

Ohno is featured in two 15-second ads, taglined “It’s Not Chocolate, It’s Gold,” that will air throughout the games.

In the first (below), set to begin airing on television on Feb. 5, Ohno, who has retired from short-track speed skating, manages to transform his outfit while getting clarification on the product’s Hershey’s credentials, despite its lack of chocolate.

The Hershey Company signed a five-year partnership with the U.S. Olympics Committee in 2015, spanning the games in Rio,  Pyeongchang and Tokyo (2020).

The company has said that it will tweet a link to a Hershey’s Gold coupon every time Team USA wins a gold medal during the upcoming games.

Its other Pyeongchang sponsorship marketing activities include presenting Team USA WinterFest, a 13-stop interactive festival tour spanning 2017 and 2018, and a #UnicornMoment campaign for the Ice Breakers brand.