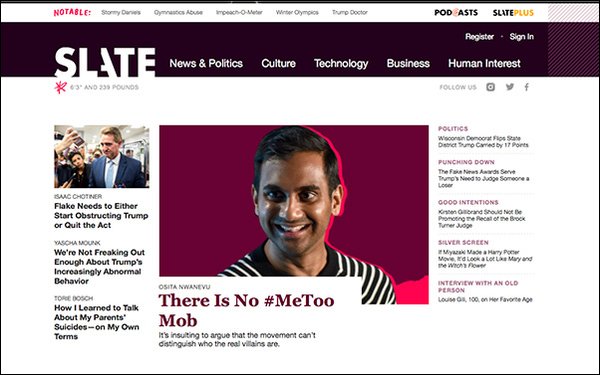 Late last year, Slate announced changes to its advertising approach and platform, and a looming redesign. At the time, it was beginning to test some new pages and approaches.

On Tuesday, the new design was revealed.

Slate’s makeover features a new logo -- its third since launching -- and a revamped home page and font. The redesign is also a chance for the publication to redefine itself  for old and new readers.

To further build its brand, Slate wanted its users to have quick and simple access to its many types of content: articles, podcasts -- among the publication's most popular assets -- and live events. Visitors can now find clearly marked categories for each of these areas of content, denoted by bold fonts. Podcasts are accessible in two places: at the very top of the homepage, or by scrolling further down.

“Other outlets may have ‘pivoted to video,’ but at Slate, we’re investing more in both written and audio work. I guess you could say we’re ‘pivoting to words,'” stated editor in chief Julia Turner.

The company employed design firm Gretel for the revamp, testing the new design with individual articles on the site last year.

Jason Santa Maria, design director for Slate, stated in a post on the site, “After that first article published, we tested, refined, and gradually started publishing more. This small corner of the site allowed us to iterate and experiment in public before opening up the project to the next big goal: a makeover for Slate the brand.”

As part of the brand reboot, Slate redesigned the menu on its homepage, making it easier for readers to see and explore all the pub’s verticals, including News & Politics, Culture, Technology, Business -- and, new to Slate, Human Interest.

Dropping the vertical previously known as DoubleX, Slate’s women’s section, stories covering reproductive rights and sexual harassment will appear in News & Politics, and those about family life and relationships in Human Interest. Turner notes this is because those topics aren’t just women’s news -- but news, period.

Slate’s last redesign, in 2013, came just as social media was becoming a major potential revenue and traffic source for online publications. Since then, Slate has found success with its membership program, Slate Plus, which it launched in 2014. Through member tracking, the pub reports its homepage traffic has increased by 15% since 2015.