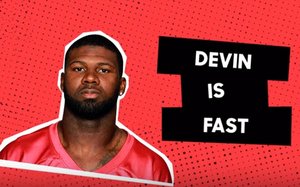 Pizza Hut is looking to drive new-member sign-ups for its Hut Rewards loyalty program through a free-pizza promotion tied into a Super Bowl player’s performance.

The pizza brand tapped retired NFL star Devin Hester (above), current holder of the record for the fastest touchdown in the history of the Super Bowl, to promote its offer.

If the current record — in 2007, Hester scored a touchdown 14 seconds into the game — is broken during Super Bowl LII, everyone who is a member of Hut Rewards before the game’s kickoff will have their accounts credited with a free, medium, two-topping pizza. Hut Rewards is open to U.S. residents 13 years and older.

The free pizza may be redeemed between Feb. 8 and 11.

Convenience via loyalty apps and mobile ordering are also increasingly critical. Pizza Hut already generates half of its orders digitally, and 70% of online orders come from mobile.

As part of the push, Hut Rewards incentives have also been made more attractive: The number of points required to earn a free medium, two-topping pizza has been reduced to 150.

Hut Rewards is also the only national pizza rewards program to offer unlimited points, according to Pizza Hut.

Pizza Hut is a sponsor of the NBC Super Bowl Pre-Game Show and has an integration with Yahoo Squares Pick ‘em.

The brand will be promoting its free-pizza offer and Hut Rewards as the faster way to earn free pizza in all of its Super Bowl elements, including its site’s homepage, its social channels (see YouTube video below), digital banner ads and its pre-game TV creative.