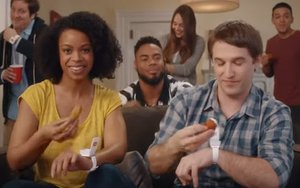 It’s another one for the annals of goofy Super Bowl promotions.

Tyson Foods is offering consumers the chance to win a new game-watching accessory: the Tyson Chicken Wing-Mate, a  reusable wristband with a compartment designed to hold a personal reserve of dip.

The idea, says Tyson, is to help fans to avoid the faux pas of double-dipping chicken bits into a communal party dip bowl, by providing them a “zone” where double dipping is A-OK.

"The Wing-Mate makes it possible to enjoy game-day entertaining without worrying about proper party etiquette,” explained Duke Zandstra, senior marketing director for the brand, which makes Tyson Any'tizers Wings, Boneless Chicken Bites, Crispy Chicken Strips and other dippable poultry items. “In fact, we even encourage the triple dip when the Wing-Mate is in play.”

Those interested in trying to snag a wristband need to visit Tyson’s Facebook page by February 2, and reveal their favorite dipping sauce. A limited number of Wing-Mates will be given away, via a random prize drawing at the end of the promotion period.

Tyson recruited former pro football running back and “Dancing With the Stars” winner Rashad Jennings to help promote the wristband contest through a video (below) and social media.