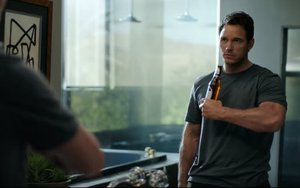 Michelob Ultra will air two Super Bowl ads for the first time during SBLII, both featuring Chris Pratt, of “Parks and Recreation” fame.

The brand today released one of the 30-second ads, to air in the second quarter.

Dubbed “The Perfect Fit” (below), it shows Pratt taking “training” for his first TV ad very seriously, although his methods — like using Michelob Ultra bottles for “curls” — are pretty silly.

Message: You don’t have to choose between being fit and having fun; you can do both, thanks to Michelob Ultra delivering taste along with just 95 calories and 2.6 mg carbs.

The second ad, to air in the fourth quarter, will be released later this week. [Update: This TV spot was released on 1.31.18]

Like Pratt, these athletes are known for living “active, balanced lifestyles,” says the brand.

FCB Chicago is the lead creative agency for both TV spots.

In addition to the ads, the brand is kicking off its "You Can Do Both" campaign with a sweepstakes. Through May 5, the sweeps will feature daily giveaways of 95,000 “fitness-focused prizes.