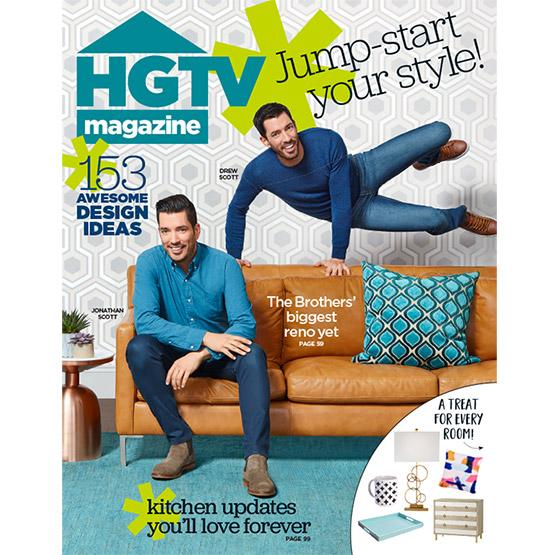 It's a collaboration with the magazine’s popular cable network, HGTV, where The Property Brothers, Jonathan and Drew, host their home improvement show. The March cover story features a five-bedroom, four-bath home the two remolded for Drew and his fiancé Linda.

“HGTV Magazine is 6 years old, and the company is good about trying new things,” editor-in-chief Sara Peterson told Publisher’s Daily. “I love the living rooms and kitchen designs we’ve shot for the cover in the past, but we’ve never shot people. With the current popularity of Jonathan and Drew, if there’s ever a time to [feature celebrities], this is a great story to go with it.”

According to publisher and vice president Daniel Fuchs, the magazine and television network share approximately two-thirds of their audiences. The new cover seemed like a good opportunity to attract some of those viewers who may be fans of the show, but might not be familiar with the publication.

HGTV Magazine boasts over 1 million subscribers and reaches 10.4 million total adult readers, with 1.3 million of those added in 2017. Millennials count for nearly 40% of those readers and its median reader age is the youngest among its competitors.

In addition, 52% of readers are reported to have bought a product after reading the publication’s ad pages, making it one of the most engaged audiences among magazine readers.

The magazine’s demographics skew female, but it is diverse. Men comprise 25% of its readership.

“We’re looking to expand our advertiser base [with the new cover story] and are talking to new advertisers across men’s apparel, wine and spirits and more,” says Fuchs. “This might be an opportunity to look outside our base.”

Part of the appeal of featuring The Property Brothers on the cover is the social-media advantage. Fuchs and Peterson both speak to the possibilities of reaching a much wider audience through the duo by sharing behind-the-scenes extras on the magazine’s social-media channels.