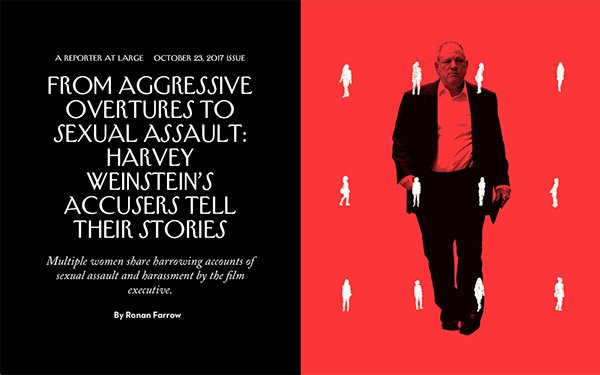 The American Society of Magazine Editors recently announced the finalists for the National Magazine Awards. It has been a big year for political reporting and investigative pieces, helping to take down some of the biggest names across industries. And the nominations reflect those efforts.

Feminist writers Rebecca Traister and Laura Penny also nabbed nominations surrounding their commentary on Weinstein and the cultural movements that sprang from those initial reports.

Traister received three nominations in the Columns and Commentary category with her pieces “Why the Harvey Weinstein Sexual-Harassment Allegations Didn’t Come Out Until Now,” “Your Reckoning. And Mine” and “This Moment Isn’t (Just) About Sex. It’s Really About Work.”

Penny’s work for Longreads was also recognized, with one column focused on Weinstein and the fallout, called “We’re All Mad Here: Weinstein, Women, and the Language of Lunacy.” She was also nominated for two other Longreads columns.

Nonprofit journalist newsroom ProPublica was nominated for three ASMEs, each with a different collaborator. They include “Kushnerville” for The New York Times Magazine, “How the U.S. Triggered a Massacre in Mexico” with National Geographic and “The Last Person You’d Expect to Die in Childbirth” with NPR.

While every day seems to bring new stories about the looming end of freedom of the press, the nominations, boasting strong social and political coverage, are welcomed reminder of the power of investigative journalism and critical commentary.

The inclusion of ProPublica, with its numerous nominations, and The Marshall Project, a nonprofit journalism outfit dedicated to criminal justice, which was nominated for best small-circulation general-interest magazine, illustrate that new journalism models are not only necessary, but viable.

While it’s true that media has found itself in shaky territory as revenue streams dry up or change direction, these examples of journalistic excellence show a public hungry for in-depth, thoughtful work that can potentially shape an industry and change society.