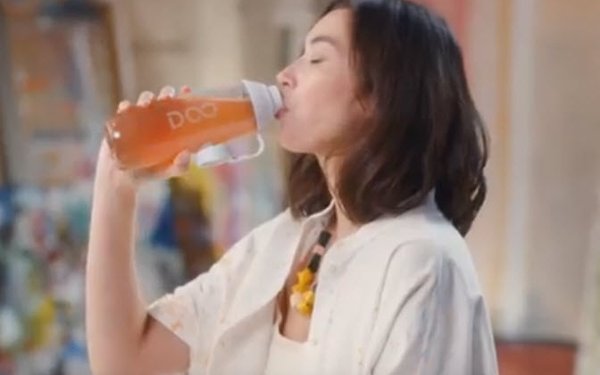 In one of PepsiCo’s more innovative efforts to diversify in the face of carbonated soda sales declines, the company is introducing its Drinkfinity flavored water system to the U.S., through e-commerce.

To use the system, you fill up the Drinkfinity water bottle, peel off the label on a pod, remove the bottle’s cap, and push the cap of the lid through a pointed plastic structure, explained Fast Co. Design. That ruptures the pod’s dry storage area and releases the liquid into the container; then you shake and drink.

The bottles, which can also be used sans pods for plain water, are being sold on the Drinkfinity site for $20. A pack of four flavor pods goes for between $5 and $6.50. Twelve flavors — including Pomegranate Ginger Flow, Mango Chia Flow, Pineapple Coconut Renew, Oatberry Flow and Acai Charge — are currently for sale.  with two more “coming soon.”

Some are billed as energizers, some as providing “power” throughout the day through vitamins; some as replenishing electrolytes; and some as natural botanical relaxants.

The system is designed to appeal to young consumers through its combination of “clean,” trendy ingredients promising healthful benefits, and a more sustainable alternative to traditional ready-to-drink plastic beverage bottles.

The “vision” behind the system is “to make a beverage that is better for the planet and the people who drink it,” says Drinkfinity’s site. “We wanted to craft an authentic drink that gave our consumers choices and empower them to create their own experience. Our goal is to keep our fans inspired with new blends and simply great ingredients…”

Each 20-ounce serving of Drinkfinity “contains up to 65% less plastic than a comparable ready-to-drink beverage, and they are much more efficient to ship and store,” says the company.

However, at present, recycling the pods isn’t exactly convenient. Users need to request postage-paid envelopes as they check out from the site. Each envelope can be used to send 30 used pods to a facility that recycles them into FDA-approved PET plastic. Drinkfinity is now investing in technologies to make pods that are “even easier to recycle and made from 100% post-consumer recycled PET plastic,” reports the site.

Pods aren’t a new concept, of course: Witness the pod-driven revolution in the coffee category, and the less widely embraced introduction of carbonated drink makers like SodaStream.

But the ability to use pods with a portable device, without the need of a fixed machine, is an innovation. And despite its relative costliness, Drinkfinity generated enough uptake within its niche market in Brazil that PepsiCo expanded the flavors and its marketing investment, according to Euromonitor International.

To help accelerate its development, PepsiCo supported Marina’s forming a small, separate startup operation focused on prototyping and testing. The bottle was redesigned as a result of the pilot in Brazil, then the system was tested with U.S. PepsiCo employees, and further tweaked before its U.S. online launch.

The still-evolving system is being sold online because it requires educating consumers. Fast Co. Design’s Katherine Schwab reported that, in addition to the recycling issue, it can take a few tries to master using the system.