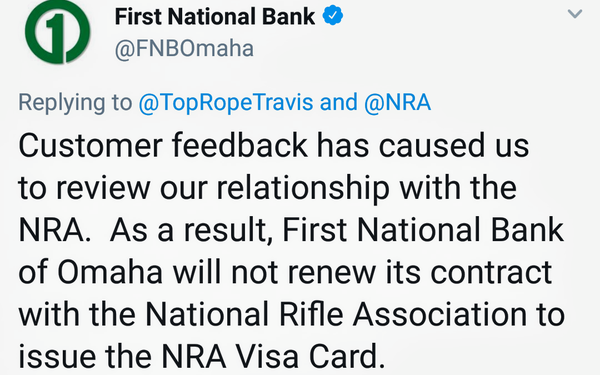 Following the lead of students nationwide inspired by the activism of survivors of the Parkland massacre and citing “customer feedback,” the First National Bank of Omaha stood up to the National Rifle Association yesterday, saying that it would not renew the contract for its NRA-branded Visa card. That news was followed by Enterprise Holdings, which controls the Alamo, National and Enterprise car rental brands, announcing that it would stop offering NRA-member discounts.

“Both companies released their statements dozens of times on Twitter in response to calls for them to sever ties with the NRA. Some Twitter users who identified themselves as customers pledged to take their business elsewhere,” reports the AP’s Grant Schulte in the Washington Post.

The bank’s action took place “after the progressive news website ThinkProgress … noted that First National Bank offered two NRA cards, each with a $40 bonus, and touted it as ‘enough to reimburse your one-year NRA membership!’,” writes Claire Z. Cardona  for the Dallas News.

First National also “faced the prospect of a public protest from the group Nebraskans Against Gun Violence, which sent an email to bank officials on Wednesday asking the bank to take ‘a stand against gun violence by ending its NRA promotions,’ writes Matt Olberding for the Lincoln Journal Star.

"If you decide to continue offering benefits to NRA members, we intend to organize a public protest of your bank and have already secured the commitments of several of your customers to cancel their accounts because they do not want to support a bank that actively promotes the single largest obstacle to the reduction of gun deaths in the United States,” the email said.

Following the decision, “Amanda Gailey, the group's director, said she applauded the bank for listening to customer concerns that, ‘the time has come for us to stop aggrandizing gun culture,’” Olberding reports.

NRA members “are still able to purchase NRA-branded prepaid Visa debit cards because those are made available through a separate entity, NetSpend, which is currently ‘reviewing the relationship' it has with the NRA,” Sara Boboltz reports for HuffPost.

“On Wednesday, a Visa spokeswoman stressed that the company strives to make its payment services available to everyone,” she continues. “Visa has no contractual or financial relationship with the NRA,” the spokeswoman tells Boboltz. “Visa co-branded cards do not represent an endorsement by Visa of that cause or organization.”

Kira Lerner's ThinkProgress article names 22 corporations in all — including Enterprise, Alamo and National — that have co-branding relationships with the NRA.

“Much like AARP or AAA, the organization promotes its discounts for members as a selling point for why people should join. The ‘valuable 5-star benefits’ promised include … savings on insurance, identity theft protection, hearing aids, car rentals, moving vans, shipping, and even wine,” she writes.

“This is a bold move for First National of Omaha but also a risky one because passions burn so hot on both sides of the topic of guns,” Matt Schulz, senior industry analyst at CreditCards.com tells MarketWatch’s Mike Murphy in an email.

“Many will applaud the move, but NRA members are famously loyal and the organization has shown itself as being very good at mobilizing its members, so there’s a real possibility of a significant backlash. However, banks are in the business of managing risk of all kinds, and First National clearly sees this as one they’re willing to take in the wake of the tragic school shooting in Florida.”

The NRA did not respond to a request for comment by the New York Times’ Tiffany Hsu, or other reporters, about yesterday’s developments.

But NRA EVP and CEO Wayne LaPierre yesterday told the Conservative Political Action Conference, “As usual, the opportunists wasted not one second to exploit tragedy for gain,” reports Paul Davidson for USA Today. “He added that gun-control advocates and the media ‘hate the NRA, they hate the Second Amendment, they hate individual freedom,’”  Davidson continues.

On the other end of the spectrum, former Obama advisor David Axelrod tweeted, “Maybe there is more promise in developments such as these than relying on a Congress in the thrall of the gun industry.”

Millions upon millions in political contributions buys a lot of thrall. 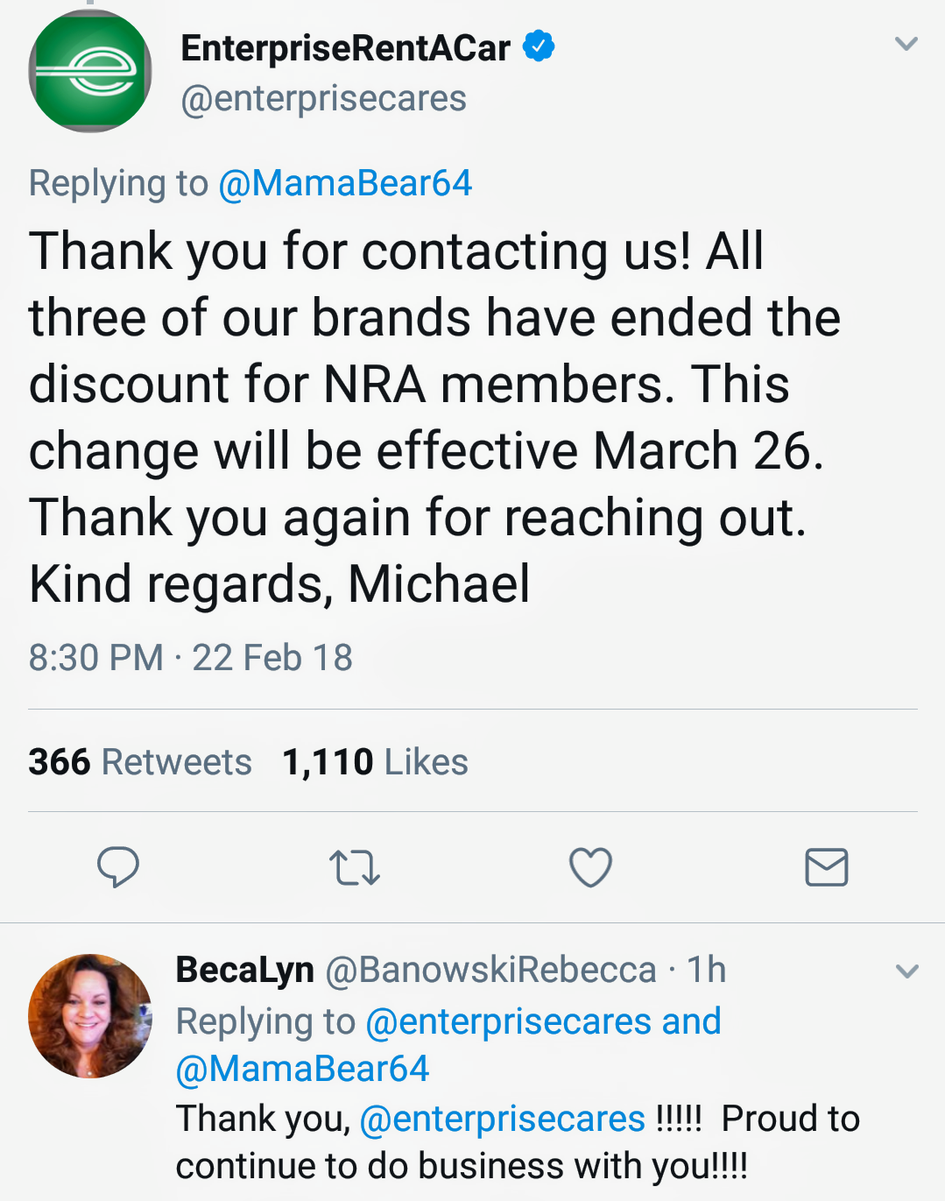