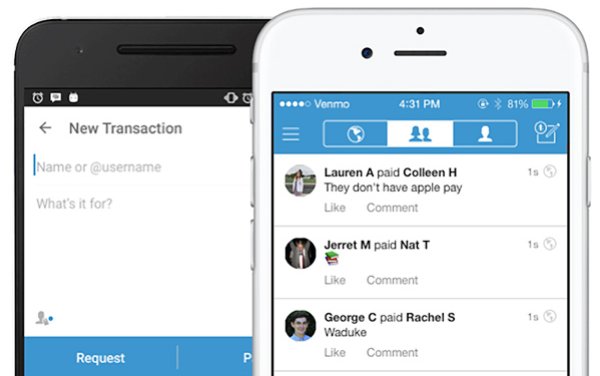 The peer-to-peer payment system Venmo misled users about whether their transactions were private, the Federal Trade Commission alleged Tuesday.

Venmo, which allows people to transfer money to each other, displays all peer-to-peer transactions on its social news feed by default. The company allows users to change their default settings, but did so in a confusing way, the FTC alleged in its complaint.

Specifically, Venmo required users who wanted to keep their transactions private to change two separate account settings -- both of which had similar labels, according to the FTC. The agency alleged that the company's labeling "would lead a reasonable consumer to believe that she could limit the visibility of all of her future transactions" by changing only one of the two settings.

Venmo, acquired by PayPal in 2016, also allegedly described its privacy settings inaccurately in its frequently asked questions. "Until at least December 2015 ... Venmo's Privacy FAQ included a graphic that incorrectly described the settings necessary to make a user's transactions private," the FTC alleged.

Venmo also allegedly misled users about a host of other matters, including the availability of funds. According to the FTC, Venmo told consumers that money was ready to be transferred to their bank accounts before it had reviewed the transactions for fraud, or sufficiency of funds.

"For many consumers, once Venmo undertook that review, it resulted in delaying the transfer or even reversing the transaction altogether," the FTC wrote Tuesday in a blog post. "Many people reported that the company’s practices resulted in significant financial hardship -- for example, not being able to pay their rent even though it appeared they had enough in their Venmo account to cover it."

The company also misrepresented its security practices, according to the FTC.

"This case sends a strong message that financial institutions like Venmo need to focus on privacy and security from day one," Acting FTC Chairman Maureen K. Ohlhausen stated.

PayPal settled the allegations by agreeing to a host of terms, including the requirement to make "clear and conspicuous" disclosures about how it shares information with other users. The company also agreed to clearly and conspicuously disclose that availability of funds is subject to review.

A Venmo spokesperson says the company has "taken steps to significantly strengthen our privacy and data security practices" since its acquisition by PayPal. "The company will continue to invest heavily in programs designed to create better user understanding and to enhance privacy," the spokesperson said.