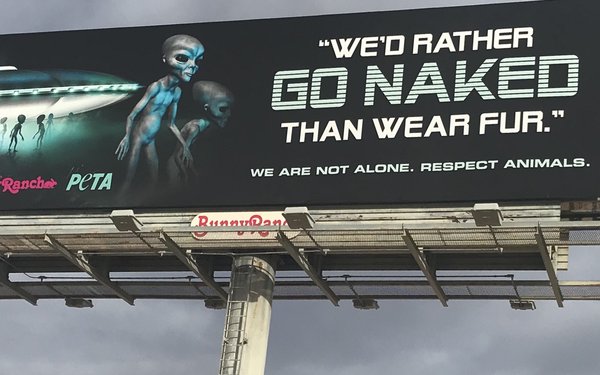 A new billboard near Area 51 in Roswell, N.M., shows a naked creature from outer space.  The message says, “We’d rather go naked than wear fur.” In smaller print, it reads, “We are not alone. Respect animals.”

It’s PETA (People for the Ethical Treatment of Animals) marketing at work again. That billboard and another one in Wyoming near where “Close Encounters of the Third Kind” was filmed went up recently.

According to Dan Matthews, PETA senior vice president responsible for some of the organization’s outrageous campaigns, “It plays on the universal fear. If there is a superior life form out there, would they treat us better than we treat animals?,” which he says is at least a sub-plot of a few science fiction films, including “Alien” itself.

The billboards say they are sponsored by PETA and Bunnyranch, a well-known Nevada brothel. That business actually owns the billboards and donated the space when Matthews explained the campaign to Dennis Hof, the owner.

PETA relies heavily on earned media, so a clever enough idea gets a lot of mileage. When audio of Donald Trump’s famously foul remark about women made news in 2016, PETA got into gear. It created artwork and said it was negotiating to a get New York space for a billboard featuring a photo of a cat and the line, “Grab A Pussy! Adopt a cat from your local shelter.”

Some women criticized that, arguing PETA was using sex abuse for laughs. But Matthews says an organization like PETA, with limited marketing resources, needs to “blend into news cycles” when the opportunity presents itself..

The alien billboard comes from a report that acknowledged that between 2007 and 2012 Nevada Sen. Harry Reid successfully prevailed to fund an Advance Aerospace Threat Identification Program at a cost of $22 million. The Defense Department on Monday released a 2015 video of a Navy pilot chasing what seems to be a UFO, which gave the bit of currency PETA needed.