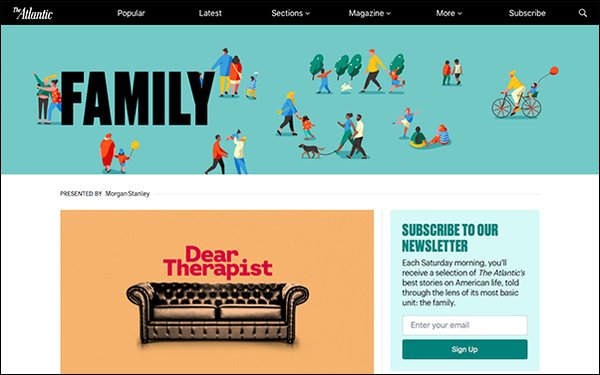 The Atlantic is introducing a new section. The Family section will focus on “the cultural, political and economic forces shaping America’s families,” according to Atlantic Media.

Coverage in the Family section will include digital stories, as well as articles in The Atlantic magazine, videos, a weekly newsletter, live events, documentaries and podcasts.

“We will be covering parenting as a fundamental part of our work. We will provide advice to those who seek it. We will cover politics and economics through the prism of families’ experiences. We will study families in all their diversity, and in their largest contexts,” Atlantic editor-in-chief Jeffrey Goldberg wrote in his note to readers on the site’s Family hub.

The new section will be led by Atlantic editor Rebecca Rosen; she will also edit the Education section. Rosen has served as editor of The Atlantic’s business section since 2014. The Atlantic will hire a new editor to lead that section in her place.

The Family section is the first expanded editorial initiative to launch since The Atlantic’s announcement in February that it will expand its newsroom significantly this year, with plans to hire as many as 100 new staffers and invest across its divisions and platforms.

Those new hires will include a deputy editor and reporting team dedicated to Family coverage.

The Family section launched Tuesday with stories about the evolving perception of marriage in America, teaching children about racism and how spanking affects children’s relationships later in life.

“The Atlantic was founded to interrogate the most urgent issues in America,” stated Goldberg. “The questions facing families—how to raise children, how to sustain equality, how to balance tradition and change, what legacy we'll leave future generations—are questions that are also shaping the nation.”

The section also includes a weekly advice column, “Dear Therapist,” where author and psychologist Lori Gottlieb will answer readers’ questions. A new weekly newsletter, “The Family Weekly,” will launch this Saturday (and continue every Saturday morning) with stories and insights to help readers.

The Atlantic has covered families in America for decades, chronicling the country’s changing norms around gender roles in the family, marriage and raising children.

Recent articles like Barbara Bradley Hagerty’s “When Your Child Is a Psychopath” and Jean Twenge’s “Have Smartphones Destroyed a Generation?” have also examined the modern challenges facing families in America today.

The Atlantic plans to expand its coverage of Hollywood and culture, technology and Silicon Valley, and grow its politics and policy reporting staff in Washington, D.C. in 2018.

The publication is also working to introduce a new Ideas section, which was announced in February. The section will focus on analysis, opinion and reporting.

Yoni Appelbaum, The Atlantic’s current senior politics editor and Washington bureau chief, will move into a new role to lead the Ideas section.