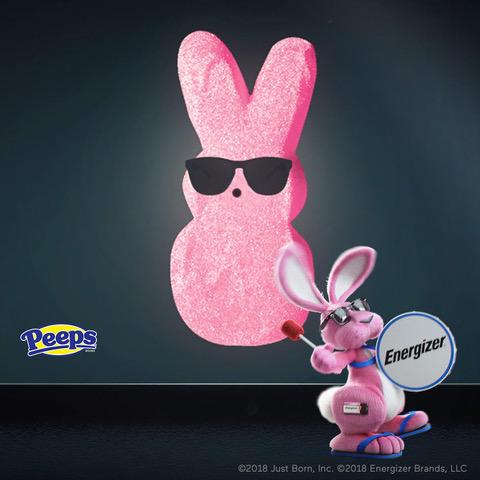 Peeps, the yellow marshmallow chicken brand found in Easter baskets everywhere, is taking diversity hiring to a whole new level in an April Fool’s joke, naming the bright-pink Energizer bunny as its first celebrity creative director. The new hire has already put his stamp on the line, adding tiny sunglasses to pink bunnies.

The gimmick, from Peeps parent Just Born Quality Confections, which also makes Mike and Ikes and Hot Tales, just may make the marshmallows newsy again. Last year, the Washington Post discontinued its long-running Peeps diorama contest due to declining submissions. (Our favorites will always be the OccuPeeps D.C. and I Have A Dream: Martin Luther King Jr. addresses the peeple.)

"It's no surprise that Easter is the holiday for Peeps,” the rabbit says in its press release, via a translator. "Who better to help power up innovation than the coolest symbol of long-lasting energy?”

This year marks the first time since 1956 that Easter has fallen on April 1st, and brands are serious about the importance of the holiday. The National Retail Federation expects Easter spending to decline a bit to $18.2 billion, from $18.4 billion a year ago. (That’s still the second highest on record.) The survey, conducted by Prosper Insights & Analytics for the NRF, reports that 81% of Americans intend to celebrate the holiday somehow, with average spending of $150 per person. (That’s down from $152 per person a year ago.)

Candy is by far the most common purchase, with 89% of respondents planning to spend some $2.6 billion, followed by food, at 87% and $5.7 billion, and clothing, 48%, at $3.2 billion. Greeting cards, decorations and flowers are also big categories. (The survey is based on a sample of some 7,700 adults.)

Discount stores are the first choice for shoppers, with 59% of consumers planning to shop there, followed by 46% at department stores, and 28% purchasing items online.

Target is hoping to use customer eggxperience to enchant Easter shoppers, transforming the Target app into an egg hunt. Using the app in stores reveals hidden eggs that are surprise deals from its Cartwheel program, offering everything from Starbucks offers to apparel.