'Outside' Introduces 2 Special Podcasts, Reflects Diversity In May Issue 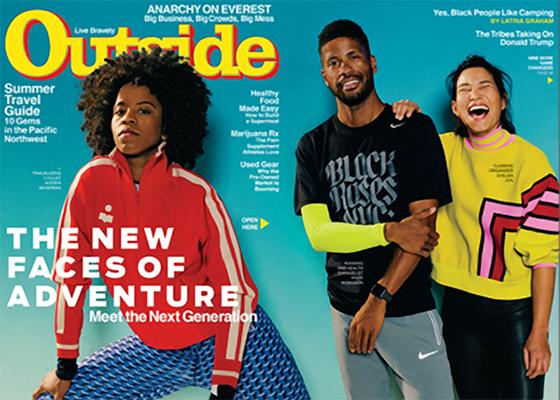 Outdoors lifestyle magazine Outside is debuting two new podcast series, one dedicated to women and the other diversity in the industry. The two series reflect the theme of inclusivity, the focus of Outside’s latest magazine issue, out tomorrow.

“Outside wants to lead the industry beyond its comfort zone, recognizing and bringing in new people and voices into the active lifestyle space. Making that happen naturally requires a company-wide effort, using all our platforms to reach every segment of our audience and tell more inclusive stories about the world of adventure,” Chris Keyes, editor of Outside, told Publishers Daily.

There will be four episodes in each new podcast series. Each episode will focus on an interview with a specific personality working to improve inclusivity in the outdoors industry. The episodes will air about every week or so.

The first episode goes live tomorrow and will be hosted by Outside contributor and NPR correspondent Stephanie May Joyce.

Joyce will profile women like Kris Tompkins, a former CEO of Patagonia, and Kellee Edwards, the second black woman to have a show on the Travel Channel.

The second series features James Mills, author of Outside’s May 2018 magazine cover story “This is What Adventure Looks Like” and the book “The Adventure Gap.” Mills will interview Ayesha McGowan, on track to be the first female African American professional cyclist, and Knox Robinson, the founder of the Black Roses NYC, a diverse group of urban runners, also featured in the May issue.

Keyes said Outside magazine and the outdoor industry as a whole has historically “fallen short on presenting the true breadth of perspectives and personalities in the world of adventure.

“The outdoor industry has overlooked coverage of people of color, people with disabilities and members of the LGBTQ community among others. These communities account for a large segment of the outdoor industry population, yet are rarely reflected in adventure media, industry advertising or the environmental movement."

The May issue, he said, is "a concerted effort to chart a new path, marking the first step in Outside’s long-term commitment to diverse coverage.”

The magazine feature profiles 12 people in the adventure community working to make it more inclusive.

Another piece in the May issue confronts the myth that “black people don’t like the outdoors,” penned by writer Latria Graham.