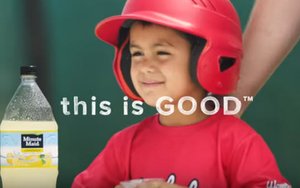 The “This Is Good” campaign encourages parents to embrace and share more of their “authentic” or “perfectly imperfect” family moments on social media, using the hashtag #thisisGOOD.

The campaign — similar in concept to a number of “take the perfectionistic pressure off parents” campaigns in recent times, including Plum Organics, Kraft Macaroni & Cheese and the “Family Greatly” umbrella campaign for Kraft products — is based on Minute Mad-commissioned research confirming that most parents edit their social content to make their families look good. (For instance, 94% of parents who post pictures or videos of their family on social media admitted to having staged or posed a photo or video before posting.)

Minute Maid’s first new TV spot (below) depicts a dad enjoying the experience of watching his little boy play T ball for the first time—even though the boy mistakenly runs the wrong way after he manages a good hit.