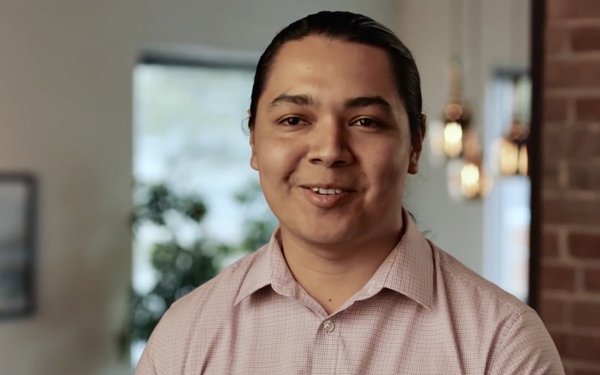 HP today launches the fourth commercial in its Reinvent Mindsets campaign, this one aimed at Hispanic audiences the computer firm hopes to encourage to find a place with them in the tech field.

The 1:42 video, “#Latino Jobs,” now on YouTube, was due to get its debut showing at Hispanicize 2018, a three-day event in Miami that began today aimed at Latino trendsetters involved with content creation, journalism, marketing and tech.

The spot is a mix of man-on-the-street interviews in which passersby describe what they think of when they hear the phrase “Latino jobs.” The answers that come back are the predictable stereotypes: Roofers, lawn maintenance, construction and, says one woman, “Jobs that don’t require a high level of education.”

Those answers are followed up with Hispanic employees describing their titles: “thermal engineer,” “software consultant,” “bilingual media professional” and the overall message that, in reality, Latinos hold every kind of job under the sun.

It ends with a pitch from Kim Rivera, HP’s chief legal officer, pleading, “Help us reinvent what a Latino job means by being part of the change. HP is hiring and talent is our only criteria.” The screen flashes a Web address to apply.

This iteration of the Reinvent Mindsets campaign is the handiwork of HP and the Miami-based ad agency Alma. HP was quick to point out the ad was a collaboration between a female creative director Beatriz Torres, a female director, Ali Alvarez and a female producer, Carol Eannace.

Previous ads in the Reinvent Mindsets campaign have dealt with efforts to encourage African-Americans, LGBTQ and female job candidates.  An upcoming campaign will make HPs case to military veterans.

Based on statistics HP provided, it would seem the company is not just blowing smoke. Forty percent of its board of director members are women and 50% are minorities, which it claims makes it the most diverse board in the tech industry. It has won awards from industry groups for its progress hiring female engineers, an LGBTQ “Best Places to Work” award and a “Top 50” award from the trade publication Minority Engineers.

HP claims 21% of its executive leadership is Latino. But overall in the industry and at HP, the Latino and minority white collar workforce still has a lot of room for improvement.

A study that made news last year concluded, based on Equal Employment Opportunity Commission (EEOC) data from 2007 to 2015, that the number of Hispanic executives in the entire tech industry increased by 24% but still represented just 3.5% of the total.

HP is paying the way for a group of 30 college journalism and communications students to attend Hispanicize to network and learn from successful Hispanic executives and discover a path for themselves.

“We want to make clear what HP stands for,” said Martin Stier, a native of Argentina who is HP’s global head of human resources and  printing business and marketing and communications. “Being one of the most inclusive brands will help us, he said in a phone call from Hispanicize. “It’s a moral obligation and a business imperative.  Diversity helps us drive innovation.”

Stier says that it’s easier to recruit marketers than engineers because there are just more of them. “When you are recruiting at a university, you find your pool is very limited.” What’s needed, he said, is for HP and other companies to “change the base and raise awareness.”