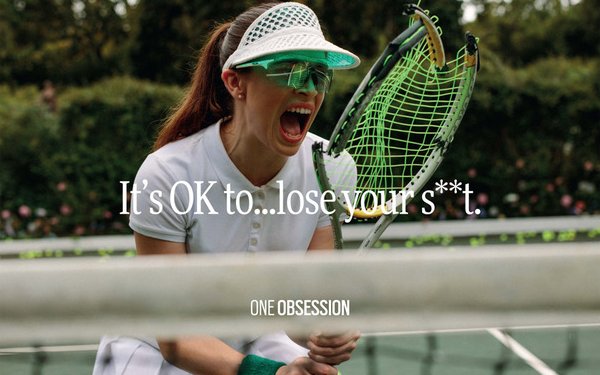 The world may be filled with people who have a mostly indifferent relationship with exercise, but Oakley knows its best customers aren’t just avid, they’re obsessed with their sport. (They think about workouts more than sex.)

So for the latest chapter in its ongoing “One Obsession” campaign, a new campaign offers them a free pass for overreacting on tennis courts, sneaking out of bed while unsuspecting loved ones still snooze or ditching friends just because it’s a good powder day. Called “It’s OK,” the campaign stars Oakley’s athlete ambassadors, who celebrate the often-ugly moments of pursuing a sports passion, right down to surfer’s sores and battered noses.

It includes digital, social, outdoor and some retail activations, as well as live events. And in an audio twist, Oakley plans to release the soundtrack to the film, an original song that blends soul, jazz and a big-band vibe, on Spotify. “The goal was to create a powerful, unique song that ultimately illustrates the passion and obsession that characterizes these committed professional and everyday athletes,” says Peter Lund, executive creative director of AKQA Paris, which created the campaign, in a release.

The campaign is based on research Oakley did among 500 committed athletes, plumbing the depths of their devotion. One in five athletes say they’d be willing to give up two weeks of vacation or 5% of their salary if they could train as frequently as they want, and 30% say their sport gets them out of bed each morning. Some 40% would prefer to be good at their sport than at their day job.

And yes, 80% admit they think more about their sport each day than they do about sex, while 34% have ditched romantic relationships that got in the way of training.

Oakley, owned by Luxottica Group, the Italian sunglass giant, says it will continue to roll out stories of obsession and inspiration throughout the year.