Advertising for Mexican beers imported to the U.S. is on the uptick. Everything from TV commercials to digital in-stream ads point to Americans’ love affair with the light, crisp flavor of lagers you can only get south of the border. About two-thirds of America’s imported beer is Mexican, most of which is distributed by Constellation Brands, Inc.

In a recent shareholder report, Constellation reported fourth-quarter sales and profit above Wall Street estimates, driven by strong demand for high-margin Mexican import beers, Corona and Modelo. Beer sales, which accounted for about 77% of the net sales in the quarter, rose nearly 12% to $997.2 million. To cater to the rising demand, Constellation will spend $900 million in 2019 to expand capacity at its breweries in Ciudad Obregón, Mexico.

Not to be one-upped, MillerCoors is tossing its hat in the ring with its acquisition of Sol beer from Heineken last fall.  Sol beer is a significant force in Mexico, ranking as the sixth-largest brew as of 2016.

So, what’s driving the increase in Mexican beer consumption domestically? A simple explanation would be the rise in the Hispanic population in the United States. But, it is more nuanced than that when we start to dig into the numbers:

1. Roughly 4 million Gen Zers are turning 21 this year. If you consider the fact that the bulk of Millennials are still in their 20’s (prime drinking years, according to Gallup) and have access to increasing disposable income, it makes sense to see a bump in alcoholic beverage consumption.

2. However, increases in Mexican brand consumption may be more influenced by the large concentration of Hispanics in this combined youthful cohort. Millennials and Gen Z make up roughly 65% of the U.S. Hispanic population. When looking at the top Mexican import beers among respondents 21+, Hispanic heritage plays a clear role in brand preference: 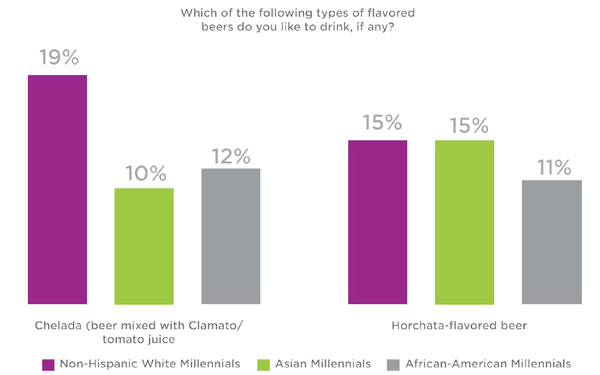 Multicultural Gen Z and Millennials, specifically Hispanics, are driving a Mexican beer renaissance. Furthermore, non-Hispanic whites in this generation are more open than ever to try ethnic flavors in their foods, beverages, and of course, beer. The resurgence of Mexican beer as a category is a bellwether for marketers. As each generation becomes more diverse and more open to varied food and beverage experiences, food and beverage marketers have an opportunity to capitalize on this trend.