Drive.ai Putting Its Driverless Cars On The Road In Frisco, Texas 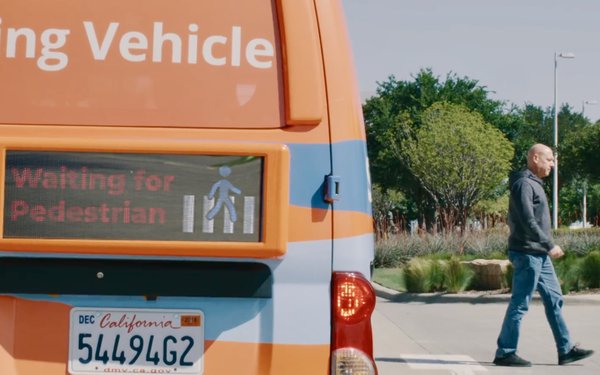 You can see a van in action — and inaction, as it stops while a pedestrian strolls through a crosswalk — in this short video.

The north Texas city of Frisco, intent on putting itself on the map as a place where innovation happens, will be the scene of the first self-driving car service for the public when Drive.ai vans begin shuttling workers, shoppers and football fans on public roads near the Dallas Cowboys stadium starting this July.

“The initial service will be available to transport the 10,000 employees working at offices at Hall Park to retail and dining options nearby at The Star in Frisco, where the Dallas Cowboys are headquartered. For many, the distance (just shy of a mile) is too far to walk but too short to warrant a trip by car,” Valerie Wigglesworth writes for the Dallas Morning News.

“The program’s vehicles, Nissan NV200 vans, are painted bright orange and have visible sensors as well as four screens that tell pedestrians what the car is thinking, such as ‘Waiting for You to Cross’ and ‘Passengers Entering/Exiting,’” writes Bloomberg’s Ellen Huet. “Drive.ai declined to say how many cars will be part of the project. As of Nov. 30, the startup had seven vehicles licensed for autonomous operation in California.”

“Using our app, members of the Frisco community will be able to call Drive.ai’s self-driving vehicles on-demand. When the pilot launches, our vehicles will drive on public roads between Hall Park offices and The Star, connecting busy offices with popular retail, dining, and entertainment options. At launch, the service will be administered by the Denton County Transportation Authority and operated in conjunction with The Hall Group, Frisco Station Partners, and The Star,” according to a post on the Drive.ai blog published on Medium.

“‘Frisco is making a statement that we’re going to lead in innovation,’ Mayor Jeff Cheney told a crowd of dignitaries and media gathered for a demonstration on Monday,” the Morning News’ Wigglesworth reports. The city has about 170,000 residents and is the fastest-growing cities for business in the country according to a WalletHub survey.

“While other companies have tested self-driving cars for years and some are in the early stages of offering a taxi service, Drive.ai’s autonomous vehicle debut on Monday was still notable. It was the first new rollout of autonomous cars in the United States since a pedestrian died in Arizona in March after a self-driving car operated by Uber hit her,” points out Cade Metz for the New York Times.

“The fatal crash renewed a debate about driverless technology safety, casting a chill over the industry. Uber immediately halted its testing program, which remains at a standstill. Other big players, including Toyota, also paused their self-driving tests,” Metz continues.

“Drive.ai was founded in 2015 by former graduate students working in Stanford University’s Artificial Intelligence Lab run by Andrew Ng, a renowned artificial intelligence expert who is the former chief scientist at Chinese tech giant Baidu, and he helped build the Google Brain project with Jeff Dean. Ng is chairman of Drive.ai’s board,” writes Fortune’s Kirsten Korosec.

“The company came out of stealth mode — a temporary quiet period to avoid alerting competitors — in August 2016 with some details about what it was building,” Korosec continues. “Since then, the company has provided periodic updates, new board members, a partnership with ride-hailing service Lyft, and its first public video of self-driving technology.”

“The company is beginning its pilot program with human ‘safety drivers’ who will call upon ‘human insight’ in certain circumstances. As the vehicle’s deep-learning system becomes more intelligent, human drivers will take on a smaller role until the final phase, when the vans operate with only passengers in the vehicle,” writes Peter Holley for the Washington Post.

“Self-driving cars are here, and can improve the way we live right now,” Sameep Tandon, co-founder and CEO of Drive.ai, says in a news release announcing the partnership (and no doubt fishing for additional ones). “Our technology is safe, smart, and adaptive, and we are ready to work with governments and businesses to solve their transportation needs.”

And working with John and Jane Q. Public, one would think, to overcome their anxiety about riding in driverless cars, as inevitable as they may be.