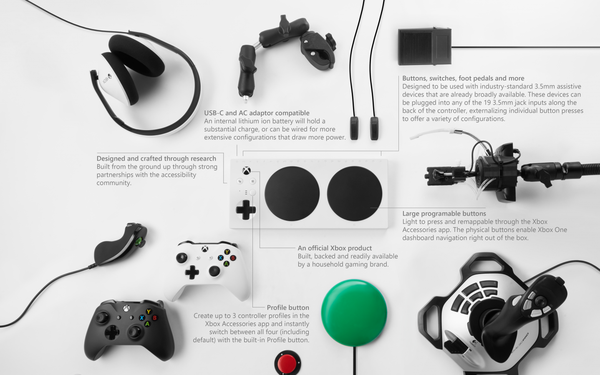 Microsoft just released the Xbox Adaptive Controller that is apparently the first mass-produced device specifically designed for use by players with disabilities. It is supposed to retail at about $100 starting later this year.

It’s not a thought that must enter into the minds of most gamers, but people with limited physical abilities are shut out of, or limited by, many gaming opportunities.

Xbox teamed with groups like The AbleGamers Charity, the Cerebral Palsy Foundation, Special Effect, Warfighter Engaged and Colorado’s Craig Hospital that specializes in spinal cord injury and traumatic brain injury rehabilitation to find a solution to serve that market.

Xbox may be tapping into a receptive market. According to a survey conducted by Information Solutions Group for PopCap Games, more than 20% of gamers have a physical, mental or developmental disability, about 5% higher than the number of people disabled that way in the general population. But those who play spend more time per week doing it than others, and for longer periods of time per session.

“Our goal was to make the device as adaptable as possible, so gamers can create a setup that works for them in a way that is plug-and-play, extensible, and affordable,” explained Phil Spencer, head of Xbox, in a blog post. “In addition to working with common adaptive switches that gamers with limited mobility may already own, it has two large buttons built in. These buttons can also be reprogrammed to act as any of the standard controller’s button inputs via the Xbox Accessories app.

Other products have subtle designs built in with an eye toward people with disabilities. For example, automakers changed some dashboard functions and designs to make it easier for people with problems like arthritis to turn ignition keys.

On the adaptive controller, the 19 jacks across the back of the device are like the number of inputs on a standard controlled but they are in a line, not stacked so they're easily accessible for people with dexterity challenges.

The device is rectangular so it will rest comfortably in users' laps without falling between their legs or requiring them to sit in an awkward position, according to a story on Microsoft’s Story Labs Website.