Will The Latino Vote Tip Elections THIS Year?

In more than 20 years of Hispanic marketing, I’ve heard this line over and over: The Latino vote could tip the elections this year. It’s true the Latino vote has helped tremendously for both Democrats and Republicans as Latinos swayed the elections of George W. Bush both as Texas governor and then president in his race against Democrat Al Gore. They were even a force for Hilary Clinton, who secured over 60% of the Latino vote. 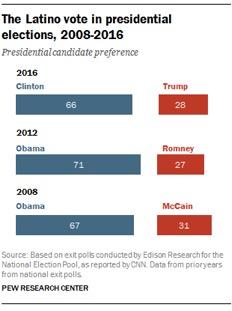 However, according to the University of Southern California's Program for Environmental and Regional Equity, young Latinos are not showing up to vote. The USC study says that just 43% of Latinos 18-29 registered to vote and, of those who registered, only one-third actually voted in 2016.

The study also states that Latino Millennials' turnout in 2016 was less than African-Americans and Anglos of the same cohort, who voted at 48% and 44%, respectively.

While turnout of the Latino vote has many national implications, it is especially influential in states like Texas with such high Hispanic populations. Yet in Texas, the Latino vote is anemically represented. In general, Texas ranks next to last for overall voter turnout in the U.S.

This year in Texas, over 880,000 Hispanic youth will turn 18 and be eligible to vote in time for the 2018 elections. According to Pew Research Center, 41% of Hispanics who are eligible voters in Texas are Latino Millennials (ages 18-33).

Texas is at a statistical tipping point if Latinos really do come out to vote, and that stretches beyond 2018. Nearly half of all Texans under 18 are Latino and 95% in that age range are U.S. citizens, according to an analysis for Jolt also in the same USC study. Jolt is a group formed by Cristina Tzintzún in Austin, Texas, to mobilize Latino youth in high school and college around key causes.

There seem to be plenty of issues to motivate Latinos to come to the polls, particularly in Texas. They include Texas’ immigration policing law, SB4. This law says that elected leaders, police chiefs and sheriffs can be removed from office if they restrict enforcement of federal immigration laws. Add to this the “border wall funding” and the lack of immigration reform for DACA recipients, and Latinos just might turn out to vote.

I spoke with Tzatzil LeMair, the founder of Latinx For Beto, a grass-roots organization hoping to get Beto O’Rourke elected U.S. senator against a very formidable opponent, incumbent Ted Cruz. I asked Tzatzil why she thinks Beto has a chance with Latino voters as a non-Hispanic candidate and why the Latino vote is important.

“The Latino vote is important for all candidates in Texas, not just Beto,” she said. “Whichever candidate can get the Latino voters to come out would receive one-third of all eligible Texas voters. That’s how powerful the Latino vote really is here in Texas.”

LeMair said the Latino vote hasn’t been tapped. “Getting new Latino voters to turn out is the key to winning. He appreciates the Hispanic culture and has spent his whole life in a Hispanic community and a border community, El Paso. Since Beto was born and raised in a very Hispanic area, he’s uniquely qualified to make that connection (with Latino voters).”

But Republicans aren’t conceding the young Latino vote. In a recent article, George Antuna, co-founder and board member of Hispanic Republicans of Texas, said young Latinos who are citizens or here legally understand “that the economy is huge, and it affects their wallet and their pocketbook and that is what they are voting for.”

Each side, eager to tap this vast and growing spring of potential support at the polls, has to find the right combination of candidate and message to move this voting bloc off the sidelines and into the voting booths.