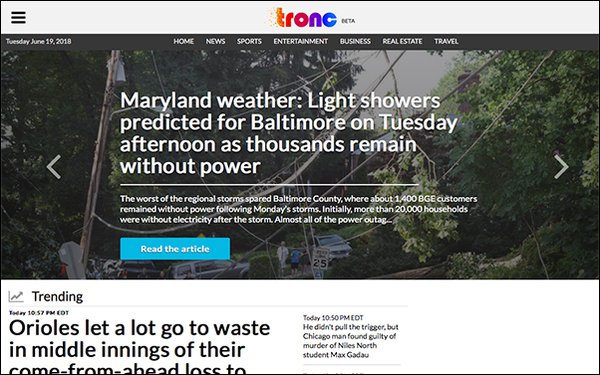 The creativity of media executives and reporters alike reached fever pitch the moment Tribune Publishing changed its name to Tronc in 2016. Twitter exploded with jokes from the media industry; my favorite: “‘TRONC TRONC’ is how "Law & Order" starts, right?”).

The Chicago-based publisher of Chicago Tribune and New York Daily News, among others, is believed to be changing its name back to Tribune Publishing, after a year of disappointing revenues, layoffs and sexual harassment allegations.

But it’s more likely Tronc was waiting for the sale of its California properties to close to make the name change.

On Monday, Tronc completed the sale of the Los Angeles Times and San Diego Union-Tribune for $500 million to biotech billionaire Patrick Soon-Shiong.

The headline of a New York Post story published yesterday reads: “Tronc finally realizes it has a stupid name.”

Back in 2016, John Oliver dedicated 20 minutes to mocking the name change on his HBO show “Last Week Tonight.” The name Tronc sounds like “a stack of print newspapers being thrown into a dumpster,” Oliver said in the segment, which has been watched over 9 million times on YouTube.

Michael Ferro, chairman of the company at the time, pushed for the name change in June 2016 to stand for Tribune Online Content. He left the company in March.

The Tronc rebrand did not stop at the odd name — it came with a new logo that resembles a computer motherboard chipping away. It was promoted by a corporate video and press release full of buzzwords.

“Rarely does public commentary sing a new name’s praises," Nik Contis, senior partner at branding and naming agency PS212, told Publishers Daily. "Even some of the strongest brand names in the marketplace today, like Alphabet, Verizon and Accenture, were not immune to public flak at first."

The problem, Contis said, is the linguistics of the word "Tronc."

"As an acronym, it has an unfortunately raw, primitive guttural sound... Tronc sounds more like a comic-book word used to describe a violent blow to the head with a rusty metal object.”

Contis believes the company would have been better off renaming itself Tribune Online or Tribune Content, rather than condensing the name.

If selling off its California properties are “indeed a positive move for the company, then reverting to the original name may appear not only logical, but potentially comforting to the Street. It makes for a good story about simplifying holdings and leaning on the tried and true," Contis said.
domain names, management, newspapers
Next story loading