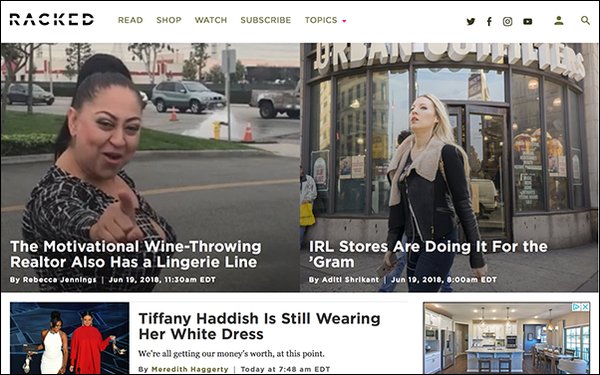 Vox Media is folding Racked, the retail website it acquired in 2013, into the Vox website as a a new vertical focused on consumer culture, called “The Goods.”

According to Axios, which first reported the news, the vertical will get a new logo and new hires. Racked’s existing URL will continue to house the brand’s archives.

Vox Media is currently talking to sponsors to help launch “The Goods.”

Vox Media acquired the Curbed Network in 2013, bringing Racked, food site Eater and cities-and-homes site Curbed into its ownership. Eater and Curbed, according to Axios, were successful in sustaining themselves as standalone brands.

Vox and Racked overlapped in audiences, as the latter began publishing more investigative pieces about style and fashion.

In February, Vox Media laid off about 50 staffers — roughly 5% of its workforce — as the company moved to scale back some of its digital initiatives, mainly in online video projects and native social video.