L.L.Bean Takes 'Be An Outsider' To Work 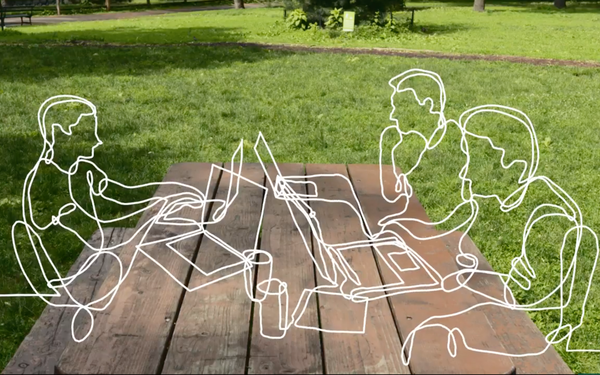 L.L. Bean is looking to throw its own twist on the #OptOutside movement, taking an al fresco co-working concept on a big-city tour.

The new effort is part of its #BeanOutsider ad campaign, which urges people to spend more time playing outside, and is based on its findings that the typical American, trapped indoors 95% of the time, with nearly half spent working. Since it people are more productive, creative and happier when they get outdoors, Bean is bringing the outdoor office spaces, including portable conference rooms and pedal desks, to New York City first. The event is then scheduled to move on to Boston, Philadelphia and Madison, Wisc.

Bean says that while 87% of people in its research say they like being outdoors, 75% “rarely or never” take time to find ways to work outdoors.

A video explains how the program, a partnership with Industrious, works, and a dedicated site lets people book the space. It also provides content on how to work outside, including Outerviews, Blue Sky Brainstorms and Al Fresco Feedback. The research included 1,050 adults.

The retailer, based in Freeport, Maine, says it’s sending some of its Outdoor Discovery Program experts to organize short team-building exercises, “which will involve a group problem-solving activity designed to highlight teamwork, communication, and leadership skills.” (L.L. Bean’s Discovery offerings in Maine include everything from fly-fishing and skeet shooting to full-moon canoe paddles.)

It’s not the first outdoor retailer to encourage people to get outside: Rival REI’s #OptOutside program, now in its third year, urges Americans to spend Black Friday outside instead of shopping, an effort that has won it just about every advertising prize there is, as well as millions of followers. It’s expanded the rallying cry to 700 organizations. And last year, it made #OptOutside posts searchable, so that people could find suggestions by activity and location.

Bean is also expanding its experiential footprint. Last month, it announced it’s made a three-year deal Hike it Baby, a nonprofit that encourages families with little kids to get out and hike. Bean will be the main partner presenting of its Trail Network, a section where family and friends can find family-friendly local hikes and connect with other families. The tool is expected to be available this fall.