As 'Post-Gazette' Cartoonist Is Fired, 'The New Yorker' And 'Time' Show Power of Visual Commentary 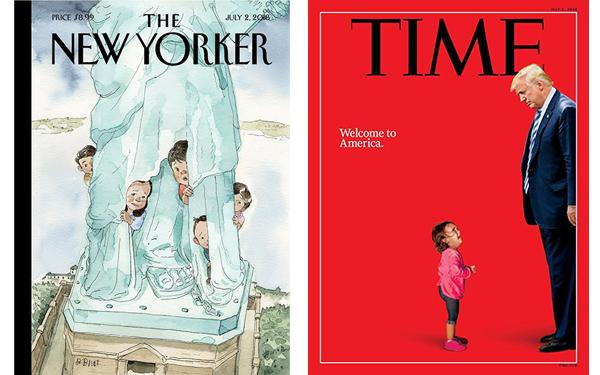 On June 14, longtime Pittsburgh Post-Gazette cartoonist Rob Rogers was fired after his pieces criticizing the president and his administration were serially rejected for publication. He had been with the newspaper for 25 years.

Rogers and newly hired editorial director Keith Burris frequently disagreed about the editorial direction of his work, as the paper’s executives seem to be turning a once liberal/centrist paper to the right.

Outraged readers have cancelled their subscriptions and urged others to do the same. The Post-Gazette's unionized writers and non-unionized editors took out two ads that stated: "The reporters, photographers, copy and web editors, artists, designers and managers ... want to remind our readers who WE are. We are independent, impartial journalists who work without interference or influence to provide OUR community with news that matters. ... We hope that you will continue to stand with us as we perform this vital work."

Even Pittsburgh Mayor Bill Peduto issued a statement: "The move today by the leadership of the Pittsburgh Post-Gazette to fire Rob Rogers after he drew a series of cartoons critical of President Trump is disappointing, and sends the wrong message about press freedoms in a time when they are under siege.

"I've known Rob a long time. That has never stopped him from publishing cartoons that are critical of me, of my policy positions, or of my actions (or inactions) in office. ...  and I know people of all political persuasions stand with me in support of him, even if the Pittsburgh Post-Gazette regrettably does not."

(In 2015, Rogers received the Berryman Award from the National Press Foundation. In 1999, he was a finalist for the Pulitzer Prize.)

How this move will impact the paper’s bottom line is unknown, but at a time when the smallest hit to a newspaper’s budget can result in domino-effect disasters, it’s likely the Post-Gazette can’t afford too many dropped subscriptions or potentially departing advertisers.

Meantime, Rogers has taken his work to a new alternative weekly: the Pittsburgh Current.

The reaction to Rogers' work, both from supporters and detractors, shows the power an illustration or image holds, particularly at a time when words are easily manipulated or increasingly censored.

Take next week’s New Yorker cover: “Yearning to Breathe Free” by Barry Blitt. The illustration shows migrant children, presumably those ripped from their parents at the border, hovering in the folds of the Statue of Liberty’s robe.

Blitt explained his cover inspiration in a New Yorker interview: “There’s always a background drone of outrage, it seems. Stories like this, obviously, are different. The outrage and disgust is justified and real, and needs to be paid attention to.”

Similarly, Time magazine published a photo-shopped cover depicting President Trump towering over the viral image of a 2-year-old Honduran girl, Yanela Hernandez, screaming as her mother was patted down by border control agents. She and Trump stand alone against a red background as the cover reads: “Welcome to America.”

Controversy over the image erupted last week as the magazine issued a correction about the cover story. Initially, the story claimed Hernandez had been separated from her mother. They are being detained together.

The misreporting, however, does not negate the power of the image — and its larger message.

In fact, Time editor-in-chief Edward Felsenthal stood by the cover, stating: “Under the policy enforced by the administration, prior to its reversal this week, those who crossed the border illegally were criminally prosecuted, which in turn, resulted in the separation of children and parents. Our cover and our reporting capture the stakes of this moment.”