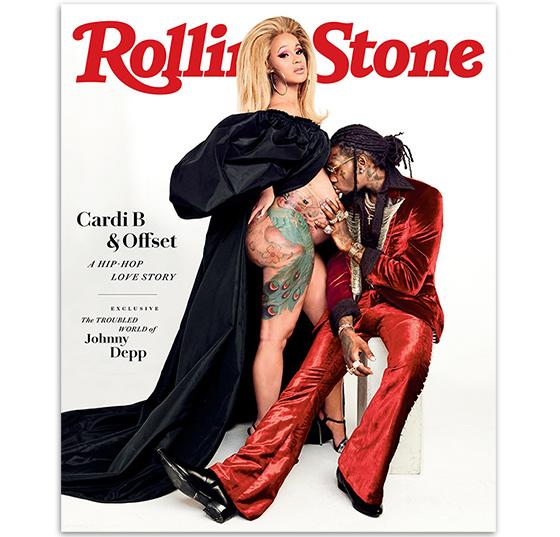 Six months after Wenner Media sold its controlling stake in Rolling Stone to Penske Media, the magazine will cut its print issues from biweekly to monthly. The Rolling Stone brand is getting a redesign in both print and digital, and a new focus on events.

The new version of the magazine will be bigger, with a larger format, more pages and heavier paper stock to put an emphasis on photography and give the product a more premium feel.

The cover of the first issue with the new look features rapper Cardi B, pregnant and posing with her husband Offset, of hip hop group Migos.

“For us to succeed, we need an authentic audience, readers who are buying our magazine," he said. "We want to set ourselves up for long-term success. You can’t do that if you are creating a fake audience for your magazine and are buying tons of traffic online."

Rolling Stone has a new, flat logo, with a larger ‘R.’

Joe Hutchinson, design director at Rolling Stone, said in a video that the aim of the logo redesign was to “revitalize the magazine… position it better for the future and modernize it."

The new RollingStone.com website is “easier to navigate and more visually dynamic," the post on the site added. “To fuel both the new website and the new magazine, we’ve staffed up in a big way, making significant hires to our editorial team,” the post reads.

Since joining Penske Media last December, Rolling Stone has made 13 hires. In June, the magazine named Jason Fine as editor. Fine had served as managing editor of Rolling Stone since 2015.

The magazine brand is looking to expand its events business in the next year, too.

“We’re planning to do something big around the Grammy Awards, which is a natural fit for us,” Wenner told WSJ. “And we’ll do a business-of-music driven conference. The holy grail is connecting the dots between digital, print, social and events.”